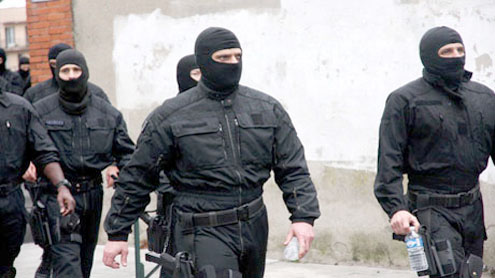 French police commandos have arrested 19 people in dawn raids across France as part of what the government described as a crackdown on suspected Islamist militants.

The swoop came amid tension following a spate of killings in southern France by Mohamed Merah, a 23-year-old from Toulouse who claimed inspiration from al-Qaida. Seven were killed in Merah’s shooting spree, including children at a Jewish school. He was shot dead by police last week after a 32-hour siege at his apartment.The arrests around Paris, Toulouse, Marseille, Nantes and Lyon were not directly related to the Merah case and the interior ministry said there was no known link between the Toulouse gunman and those detained.

But the French president, Nicolas Sarkozy, had ordered a crackdown on radical Islamists following public outrage at the Merah killings. Sarkozy confirmed the arrests on a morning radio appearance and said similar operations would follow to get rid of “people who have no business in this country”.The president compared the “traumatism” that France had suffered from the Toulouse shootings to the “traumatism” experienced in the US and New York after 11 September 2001.

Sarkozy officially suspended his bruising battle for re-election at the time of the shooting and one poll showed 70% of French people approved of his stance in the aftermath of the killings. Now back on the campaign trail, he has stressed the importance of security and the fight against terrorism.The raids were filmed by TV crews and shown on breakfast news, with anti-terrorist squads knocking down doors and shouting “police”, smashing windows and taking away suspects handcuffed with their faces covered.

The interior minister, Claude Gueant, dismissed suggestions the raids had been carried out in response to charges that the intelligence services had failed to monitor and track down Merah quickly enough. Asked if the raids were a media stunt, he said the arrests were a “judicial decision” by the French legal system and involved suspects who claimed “an extremist radical ideology, an ideology of combat”.

He said five rifles, three Kalashnikovs, four handguns and a bulletproof vest were seized. Police sources said several of those arrested were believed to be close to the radical Islamist group Forsane Alizza (“Knights of Pride”), banned in France in February after Gueant accused it of preparing its supporters for armed struggle. The interior ministry said the group’s leader, Mohammed Achamlane, had been arrested in Nantes.

Founded in 2010, Forsane Alizza came to prominence after calling that year for a boycott of McDonald’s in Limoges, accusing the American fast-food chain of serving Israel. Achamlane told the daily Libération in January that the group could not exclude launching an armed struggle “if Islamophobia continues to intensify day by day”.The government is keen to show it is cracking down on what it called radical Islamism. This week several international Muslim clerics, of Palestinian, Egyptian and Saudi origin, were banned from entering France.

Marine Le Pen, of the extreme-right Front National, seized on the dawn raids to continue her attacks on immigration and accuse the government of closing its eyes to what she said were extremists in the poor suburbs of all French big towns.”Of course there’s a clear link between the rise of fundamentalism in our country and immigration,” she said.Religious leaders have warned the public against scapegoating or wrongly equating Islam with terrorism after the Merah case. – Guardian