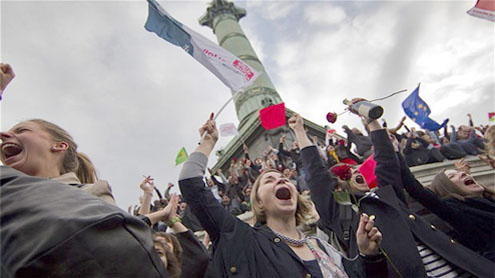 The stunning victory of the French Socialists and wipe-out of mainstream parties in Greece sent shock waves on Sunday night crashing throughout the continent of Europe.

François Hollande’s election threws down the gauntlet to Angela Merkel, the German Chancellor, who has railroaded the eurozone into agreeing a new “fiskalpakt” treaty enshrining Germany’s austerity doctrine.The economic doctrine of austerity, to cut the burden of state spending to free up the economy, has ruled supreme with the support all of Europe’s leaders, the European Union and financial markets.But political leaders were on Sunday night conceding the consensus had been shattered beyond repair.

With Europe’s economies plunging further into recession and as unemployment in the eurozone breaks record levels, voters demands for a new approach had finally become to great to ignore.The popular backlash to EU imposed austerity to the centrist New Democracy and Socialist parties in Greece threatens the existence of the euro itself. Greece is potentially ungovernable as a minority government must try and pass a new raft of austerity measures next month which are a condition of an EU-IMF bailout and Greek membership of the euro.

In France, while Hollande, the Socialist President-elect is a centrist, he is sitting on a powder keg of resentment at measures that his government will have to pass if it is not spark a meltdown of financial markets.He has refused to ratify the treaty unless the eurozone and EU also sign up to a “growth pact”.Mr Hollande also horrified Berlin by sneering at the idea that France should change its constitution to enshrine a “debt brake” outlawing Socialist spending levels.In a meeting in Berlin next week, Chancellor Merkel is set to warn the French President, that weakening austerity pledges would rattle markets and undermine investor confidence at a critical time for the eurozone’s economy.

She will remind him that support for the eurozone austerity pact is the condition for European Central Bank support for struggling financial institutions, many of which are French.Dubbed the “Iron Chancellor” domestically, she will not climb down for a Socialist president who is close to the German Social Democrats ahead of elections in Germany next year.Mrs Merkel’s governing coalition suffered a fright of its own at the ballot box yesterday after appearing to lose its ruling majority in the state of Schleswig-Holstein.

Although the German chancellor’s personal popularity remains strong the Christian Democrats-Free Democrats coalition has struggled in a series of local elections over the past 12 months, with the junior party seeing its popularity collapse.Pressure on Mr Hollande to back away from radical policies and implement the austerity measures demanded by Mrs Merkel will come from the EU and financial markets.Lord Glasman, a senior adviser to Ed Miliband, the Labour leader said that avoiding a reaction from financial markets would make Mr Hollande cautious and push him into the arms of Germany.

“There is very little chance that the financial markets will give Hollande the room to be radical. Mitterrand, elected in the heyday of Thatcher, was forced to abandon policies by the markets,” he said.”That was before the euro, which is locked to political conservatism.”French officials in the defeated Sarkozy administration have predicted economic chaos for highly indebted France, which owes most of its debt to foreign investors.”I am very worried for the French economy,” said Gilles Carrez, budget rapporteur in the French parliament for Mr Sarkozy’s UMP party. “We have made considerable efforts in the past three years to manage the crisis,” he said.

Mr Carrez said that markets were keenly aware that President Sarkozy had brought the French state deficit down ahead of schedule to 5.2 per cent of GDP.”The slightest let up will see us skid off course. Hollande proposes a return to a spiral of raising spending and civil servants,” he said.”As he has to make compromises with Communists and Greens, we are heading for the worst. The markets have not yet reacted, as we have scrupulously respected our deficit reduction commitments. But if they see the hatches even slightly opening – a U-turn on retirement reforms, say – the punishment will be immediate. The markets will judge the Socialists not by their promises but by their actions.” On May 16, the French treasury will seek to raise a billion euros on the markets, and all eyes will be on how well it fares.

Mr Hollande has promised to “dominate” financial markets, and early on in his campaign, stated that finance was his “greatest enemy”, words that might come to haunt to him.On May 30, new unemployment figures for April are due. Mr Hollande can expect bad news and a spate of industrial redundancies and plant closures, including household names such as Carrefour, which were postponed during the elections, are expected. The losses will anger trade unions and threaten to ignite social conflict in the opening days of his presidency. – Thetelegraph