Post Poll: Obama up 8 points over Romney in Virginia 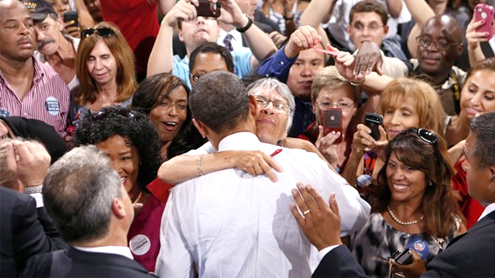 Obama up 8 points over Romney in Virginia

With just seven weeks of campaigning left before the November election, President Obama holds a clear lead over Mitt Romney in Virginia, buoyed by growing optimism about the state of the country and fueled by a big gender gap working in his favor, according to a new Washington Post poll.

Obama leads his Republican rival 52 percent to 44 percent among likely voters. Among all registered voters, the president leads 50 percent to 43 percent, a margin identical to that recorded in a survey in early May. That indicates that Romney has made up little ground during four months of intense advertising and campaign visits.Virginia is critical to Romney’s hopes of winning the White House. Without the commonwealth, his path to 270 electoral votes would be significantly more difficult. Along with Ohio and Florida, Virginia will be one of the most fiercely contested battleground states, reflecting the importance that both campaigns have put on its 13 electoral votes.

Virginia rode out the recession far better than many other states, in part because of a huge defense sector, and that appears to be working in the president’s favor. A majority of Virginia voters still say the country is on the wrong track, but the percentage who say it is moving in the right direction has increased nine points, to 41 percent, since May.Obama also receives more positive job-performance ratings in Virginia than he does nationally. A majority of voters — 53 percent — say they approve of how he is doing overall, and 51 percent give him positive marks for his handling of the economy. In the case of the economy, his marks in Virginia are significantly higher than those he received in the most recent Washington Post-ABC News national poll.

Romney has campaigned by arguing that his business background better qualifies him to turn around an economy with a national unemployment rate above 8 percent. But when asked whom they trust more to handle the country’s economic problems, voters divided almost evenly, with 47 percent saying the president and 45 percent choosing Romney.But by 54 percent to 37 percent, Virginia voters say Obama better understands the economic problems that Americans are facing. The survey was completed before a video was leaked that showed Romney saying at a fundraising event that 47 percent of Americans consider themselves “victims” and are dependent on the government.

With looming defense cuts, Virginia’s economy could take a hit, and economic problems generally remain a vulnerability for the president, both in the state and nationally.Voters offered contrasting views in follow-up interviews.“I think he’s actually making some progress, albeit slow, in terms of . . . moving our economy forward,” Henry F. Robinson, 64, of Reston, a recruiting manager for government contractors, said of Obama. “I think he is protective and is concerned about the middle class, and I think that’s where the focus needs to be.”

But Joe Bergin, 38, a defense contractor from Ashburn, said he was leaning toward the GOP ticket for the first time in his life. “Obama, he’s not really favoring government contractors right now,” Bergin said. “It definitely drives me in the direction of Romney right now. . . . I’m primarily concerned about my livelihood.” – WP