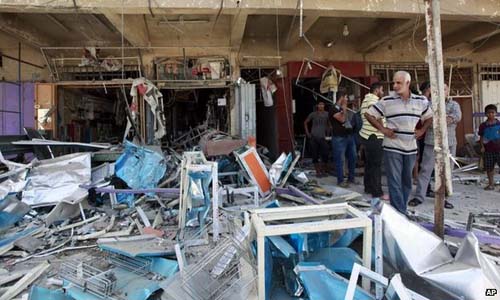 A suicide bomb has killed at least 21 people in the Iraqi capital Baghdad, police and medical officials have said. At least 13 civilians were killed in the attack, which took place at a police checkpoint at the entrance to the Kadhimiya district.

Many of those killed were reportedly on their way to a Shia shrine in the area. Iraq is experiencing an upsurge in instability. The government is battling Islamist militants, who have seized cities in the country’s north-west. At least five of those killed in the bombing were policemen, security sources said. The area is home to the Musa al-Khadim shrine, a site of pilgrimage for many Muslims.

In a separate incident, at least 14 people were killed in Iraqi air strikes near the city of Fallujah. The Iraqi government has been fighting rebels in the city for several months. Isis militants seized Mosul, Iraq’s second largest city, in June. They have since taken over areas of the north-west and closed in on cities near Baghdad. The current conflict in Iraq has acquired strong sectarian overtones, with disputes between the Kurds, the Sunnis and the Shia. The Shia-led government is struggling against predominantly Sunni Isis fighters, and other Sunni rebel groups. -bbc