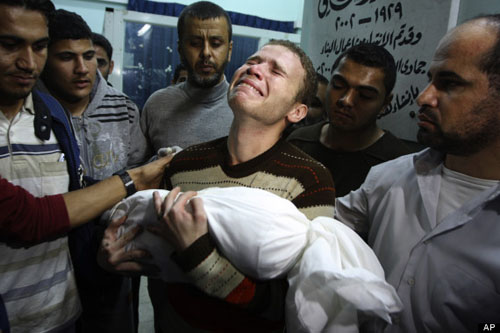 Fifteen Palestinians were killed Thursday when an Israeli shell slammed into a UN shelter where hundreds of civilians had taken refuge. And fresh Israeli fire early Friday pushed the overall Palestinian death toll in Gaza to at least 800 despite world efforts to broker a ceasefire.

The Thursday strike hit a UN school sheltering some of the 100,000 Palestinians driven from their homes in search of a safe haven after weeks of deadly fighting between Israeli troops and Hamas. The shell crashed down in the middle of the courtyard where people had set up camp, leaving the ground covered in bloodstains. Gaza´s emergency services said at least 15 people had been killed and more than 200 wounded.

UN chief Ban Ki-Moon said: “Many have been killed — including women and children, as well as UN staff.” He said he was “appalled” by the news and “strongly condemned” the attack which he said “underscores the imperative for the killing to stop — and to stop now”. Washington said it was “deeply saddened and concerned about the tragic incident”, without explicitly blaming its ally Israel for the shelling.

“We again urge all parties to redouble their efforts to protect civilians,” State Department spokeswoman Jen Psaki said in Cairo, where Secretary of State John Kerry is trying to negotiate a ceasefire. Early Friday morning a shell hit a home in the southern Gaza town of Khan Yunis, killing at least one person and sending the Palestinian death toll from 18 days of fighting to 800. -thenews

US for Taking Action Against Extremist Hindu MP

US for Taking Action Against Extremist Hindu MP