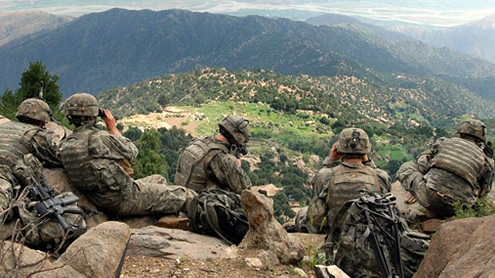 Let us first fix our own house before we worry about our neighbours and their intentions. The Pakistani ‘establishment’ has failed completely to put its house in order. Things are clearly getting worse by the day.

If I hear about the ‘Haqqani network’ and their collusion with Pakistan one more time I will be very, very upset. That interestingly is exactly what the members of the All-Parties Conference (APC) convened by Prime Minister (PM) Gilani did; they were all very upset, very, very upset and even some might say a little irate. And in their combined opinion the Haqqanis, whoever they might be, have nothing to do with the Pakistan army’s Inter-Services Intelligence Directorate (ISI) and even if they did it was at best a very ‘innocent’ relationship based on occasional roast lamb and chicken pulao parties and some entirely harmless social chitchat.

Whenever it comes to the goings on in Afghanistan, all the ‘players’ have different points of view. First is of the US and its allies, including the Afghan government, and that be can summarised as ‘Pakistan bad, ISI bad, Taliban bad, Haqqanis very bad’ and they are all trying their best to make life difficult for the US and President Karzai. After 10 years in Afghanistan, the US has reached the point of exhaustion and wants to get most of its fighting men out as soon as possible. The problem for the US is that it does not want to leave a situation behind where the Taliban take over Kabul and much of Afghanistan soon after the US combat forces withdraw from Afghanistan.

Then there is the point of view of the Pakistanis or at least of the Pakistani ‘establishment’. For those who still wonder who exactly is the ‘establishment’, a look at the APC participants will give them the answer. The beards, the pirs, the Makhdooms, the epaulets and sashes, the Chaudhries, the Maliks, the Mians and the Syeds, the tribal sardars or their representatives and the occasional ‘ordinary’ MQM types were all there. The bureaucrats might not have participated directly but were the ‘event managers’ who prepared the guest list, decided upon the agenda and were responsible for what came out of the meeting. What came out was basically that the US has overstayed its welcome in Afghanistan by almost 10 years, and ‘thank you very much for the money you gave us’ but now please leave and let us do our ‘thing’. However, after a decent interval please do restore your financial aid.

What do the Taliban want? Well, first they would like to kill as many of the foreign ‘infidels’ as possible. While killing all these infidels they would also like to see the US and NATO forces leave as soon as possible so that they can re-establish their emirate in Afghanistan and continue the holy work they were doing when they were so rudely interrupted by the US infidels 10 years ago. Once back in power, they will kill many more infidels of the Muslim sort, and destroy all remnants of ‘modernisation’ once again.

As far as the truth is concerned, truth is always the first casualty of war. So now we have multiple truths pushed by the different participants in this ‘theatre’ of war. But there are some truths that apply to us the ordinary people in Pakistan but for most of us ‘strategic depth’ is a meaningless concept. For us, the real truths that matter are about load shedding, the deteriorating law and order situation, terrorism, galloping food price inflation, the dengue epidemic in Lahore, target killings in Karachi, corruption and a rapidly disappearing sense of hope in our future as a country. Yes, these are our truths and the Haqqani network is definitely one of them.

As far as the people of Afghanistan are concerned, surely their truths are very similar to ours. They want peace above all, and a chance to go on with their lives the best they can. And I have a sneaky suspicion that many of them consider the US as an occupying force that they would like to see leave their country as soon as possible. And most importantly, I also believe that most Afghans neither want to ‘export’ terrorism nor do they want to provide safe havens for terrorist organisations in their country. Whatever system of government the Afghans eventually get will depend on their own particular attitudes. And western style democracy is probably not going to be it, at least not yet.

As far as the Tehrik-i-Taliban Pakistan (TTP) and its allies are concerned, as long as they threaten the people of Pakistan, I fully support the young men of our security forces that are fighting against them. My heart goes out to those who are dying in combat as well as those who are being killed by terrorists. It is vital for us to keep up the campaign against those who threaten us but when it comes to grand strategies put forward by the Pakistani establishment concerning the future of Afghanistan or a future war against India, I am not much impressed by that. My immediate concern is the deteriorating situation within the country. Let us first fix our own house before we worry about our neighbours and their intentions.

The Pakistani ‘establishment’ has failed completely to put its house in order. Things are clearly getting worse by the day. Even our foreign friends, if there were any to start with, are starting to lose faith in us. And as happens, when the rulers cannot fix things at home, they need a bogeyman to divert the attention of the people from the problems that face them. That is my fear; our ‘establishment’ having failed miserably at home is trying to create an issue that can provide support for them at this time.

But that is the problem! To defend the Haqqanis are they going to go to war against the US? No! Frankly, all this posturing in the name of national honour reminds me of the much used quote from Samuel Johnson: “Patriotism is the last refuge of a scoundrel.” – Dailytimes