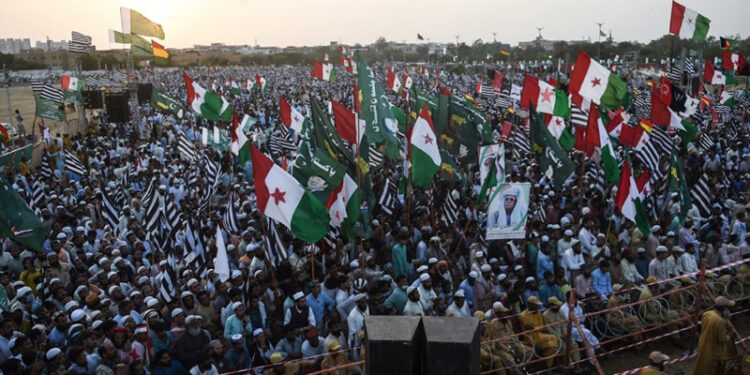 The opposition conglomerate Pakistan Democratic Movement (PDM) on Sunday held its first power show in Karachi since it parted ways with the Pakistan People Party (PPP).

While PDM’s claim of setting up 100,000 chairs for the participants was seen with scepticism, the event attracted a considerable number of people.

“A special branch report put the number between 15,000 and 17,000, while police report that between 18,000 and 20,000 people are attending,” SAMAA TV reported after the event had begun and leaders were addressing.

Drone footage also showed a large number of people. However, it was difficult to pin down a number.

JUI-F took charge of the security and other arrangements. Nevertheless, a large number of PML-N workers participated with party flags, which were painted with Nawaz Sharif’s photos. The flags of Pakhtunkhwa Milli Awami Party, Balochistan National Party, and Qaumi Wattan Party were also prominent. JUF-F flags waved everywhere at the venue.

Addressing the event, Rehman said the incompetent and illegal government had destroyed the economy. He claimed that the rulers did not have public support and, instead, were propped into power by coersion.

The PMD head said some people claimed that PDM had lost its voice, but it was not true and the PDM would continue to agitate as the state of affairs in the country was a cause of concern.

Rehman declared that PDM was going to give the PTI government a hard time.

Shehbaz Sharif said the PDM would march on Islamabad with tens of thousands of people to remove the federal government.

The leaders chose to speak on Karachi’s problems and Shehbaz took a dig at Prime Minister Imran Khan, whose promise of giving Rs1100bn for Karachi, Shehbaz claimed, was only a tall claim.

Shehbaz held Imran Khan responsible for Karachi’s woes saying that Bilawal Bhutto Zardari had informed him that Imran did not give a penny from the promised funds.

Women participation
A day before the rally, JUI-F announced that women were not allowed to participate. The announcement caused quite a stir and it was withdrawn by Fazlur Rehman.

However, very few women arrived at the gathering and most of them were from PML-N. The organizes set up a woman enclosure which remained mostly empty.