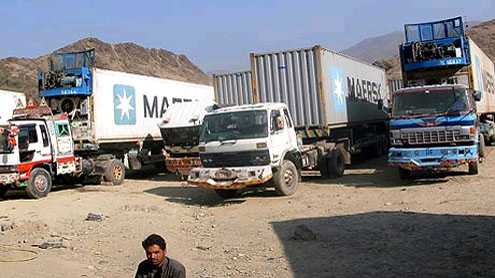 The inevitable has finally happened. The NATO supply routes have been restored after much heated and agonizing discussions and deliberations spanning over seven months.

The apology over the Salala incident that killed 24 Pakistani soldiers has been ‘received’. This positive turn in the strained Pakistan-US relationship has also more or less settled the coalition support funds impasse. Pakistan is owed $ 1.1 billion, of which $ 800 million will be released immediately and the balance after an audit. The issue of transit fees has also been laid to rest. Pakistan had demanded $ 5,000 per truck; the two sides have now agreed to $ 1,000, with the US promising to compensate Pakistan in other ways.

The cleared air over the resumption of NATO supplies has caused ripples in the opposition and right wing parties. Considering the reopening decision as a stab in the back, opposition political parties have termed it a gross violation of the parliamentary resolutions. To the Defence Council of Pakistan (DFC), the government has betrayed its people. The DFC has announced a long march from Lahore to Islamabad starting on July 8. The Taliban on the other hand have threatened attacks on the NATO supply convoys. The fact is that the growing disconnect between the US and Pakistan was turning into a strategic cul de sac for Pakistan even more than for the US.

This had serious implications for Afghanistan too, given the looming possibility that in the run up to the withdrawal of foreign forces by 2014, Pakistan and the US may have ended up on opposite sides in the endgame.Though the Salala attack that created bad blood between the US and Pakistan was a serious incident and Pakistan demanded an unconditional and immediate apology, the time lapse due to the Pakistan government’s decision to take the issue to parliament painted Islamabad into the ghairat (honour) corner and made a resolution of the issue more difficult.

As far as parliament is concerned, it had given the go ahead on the resumption of the NATO routes once an official, public apology was forthcoming. Now that the demand has been met, the cries of the opposition and right wing forces of ‘betrayal’ are mere playing to the anti-US sentiment that had gathered strength through the long last seven months. As far as the drone attacks are concerned, the US has no two opinions; they are going to be continued. However, to accommodate Pakistan’s concerns, it has been agreed that in future these would be joint operations, with Pakistan validating the targets chosen so as to minimise civilian casualties.

Whether this can be interpreted as a Pakistani veto, however, is questionable. The reason Pakistan was cut out of the drones targeting in the first place was because the US began to suspect elements in the Pakistani military establishment were tipping off identified targets to allow them to escape. The revival of information/target sharing could imply Pakistan’s withdrawal from providing protection to the Taliban in general, and to the Haqqani network in particular. The latter stand accused of the frequent attacks in and around Kabul over the past few months.

If the resumption of NATO supplies is in the interests of the US and Afghanistan, the decision to reopen the routes could imply a recognition by the Pakistani military of the by now undeniable nexus between the ‘good’ and the ‘bad’ Taliban. Now that the US is set to relieve itself of the Afghan quagmire, Pakistan should begin thinking hard over the issue of the Pakistani Taliban. This group has the potential to wreak havoc within Pakistan, as it has been doing lately through its cross-border attacks. Unless the policy of supporting Afghan Taliban proxies is dumped, Pakistan will be hard put to it to deal with their other ‘arm’, the home grown fanatics and terrorists.