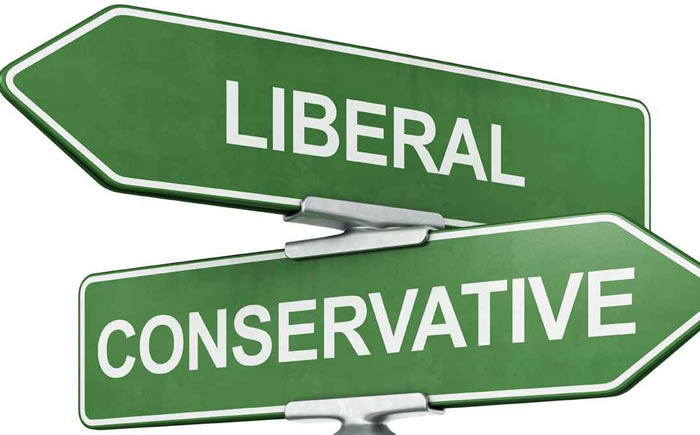 We are all different from each other. Is that a good thing or bad? That is a tricky question to answer but nature has given each and every individual a quality that set us apart. We are not only physically different but think differently too and that difference in thought forms a difference in opinion and eventually we act differently too. This leads us to define each other on the basis of our thought and we find ourselves calling each other conservative and liberal.

If we talk about institutions, we see that the very institution of government is mostly conservative. It tends to support everything based on history, religion and conformism. It does not try to master change in society but rather assures people that it will help them continue to live the way they want to live. So, in fact conservatism does not welcome change in thought. If women in a certain area are not being allowed to vote in the elections, a conservative will support that and want that to continue. Why should men vote and women should not? If you put this question to conservatives, their reply would be based on their belief that society should be structured in a hierarchy because people do not have equal abilities. Those with the ability to lead should be the leaders. They would also tell you that government should be chosen by a minority of people who have special rights and privileges. Conservatism works by resisting change. Those resisting change, which by the way is inevitable will actually be supporting conservatism knowingly or unknowingly.

This can be unhealthy for a society. It can lead to suppression which eventually leads to uprising. Social changes you will see have been brought about by movements that created revolutions. Post revolutions, scenarios change. Again it’s not a question of good or bad but of welcoming change for the better. Girls should not be allowed to go to school and get an education. Why? A conservative will be fearful of the change that will be brought about by girls’ education.

How will society handle women competing for jobs, contributing to household decisions, having a say in matters of home and government? These potential changes are scary for the conservative to handle. These changes challenge the patriarchal set up. It is therefore easy to identify the kind of society conservatives would like. It is a society that does not believe human nature is essentially good or that human beings are fundamentally rational. Conservatives tend to assume that driven by their passions and desires we are naturally prone to selfish, irrational, and violent.

A conservative society is unwelcoming and not diverse. It does not acknowledge our differences rather look at things that set us apart as disadvantages. Religion, cast and color differences affect the way we live in many societies. Swimming was always known to be a sport for the ‘white’ and that is why you will see fewer black swimmers who have achieved great heights in the sport. Conservative society tends to believe that ethics would erode when changes are brought about by acting on the spur of ‘liberal” thoughts. It is not difficult then to understand that societies only flourish when conservative thinking is challenged. Anybody who opposes discrimination on the basis of religion, political belief, color of the skin and gender to name a few, is a liberal. They want to liberate ‘you’ from the shackles of stagnancy. They are willing to accept the change that will come about by women taking their own decisions, letting people decide for themselves if they want to pray or not. Liberals are willing to explore other ways of leading a good life which could still be based on religion and politics. This way human beings flourish and evolve. There is nothing absolute and there is nothing wrong in having a difference of opinion but we need to remember that we have to live and let others live too.