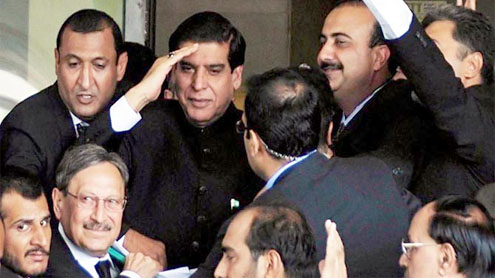 ISLAMABAD: Prime Minister Raja Pervez Ashraf on Tuesday arrived in a Supreme Court courtroom along with his counsel Wasim Sajjad for the hearing in the NRO implementation case, Media reported.

09: 12: Prime Minister Ashraf was also seen busy in consultation with Law Minister Farooq H Naek in the courtroom. Naek had accompanied the prime minister on his arrival at the court’s premises.

09:01: Earlier today, the prime minister had arrived at the the Supreme Court’s premises for the case’s hearing.

09:00: The prime minister was expected to apprise the court of the government’s decision over the issue of writing a letter to Swiss authorities for reopening the graft case against President Asif Ali Zardari, sources told DawnNews.

08: 56: Sources moreover said that the government had devised a middleway to write a letter to Swiss authorities.

08: 45: Leaders from the Pakistan People’s Party (PPP) and its coalition allies had arrived earlier at the court. The leaders present at the court included Chaudhry Shujaat Hussain of the Pakistan Muslim League-Quaid (PML – Q), Muttahida Qaumi Movement’s (MQM) Farooq Sattar, PPP’s Firdous Ashiq Awan and Awami National Party’s Minister for Railways Haji Ghulam Ahmed Bilour. The leaders stressed upon finding a middle-ground on the issue of the letter.

08:30: A large number of media and security persons were present at the Supreme Court premises. Strict security measure were witnessed at court room number four and entry into the area was prohibited hours before the prime minister’s arrival.

08:25: Islamabad’s red zone area was sealed for the public due to security concerns.

Earlier on Monday, the ruling PPP and it coalition allies had decided in a meeting chaired by President Zardari that Prime Minister Ashraf would appear before the court in the NRO implementation case to apprise it of his government’s stance on the issue of the letter.

Prime Minister Ashraf and former prime minister Yousuf Raza Gilani, who was sent packing by the apex court in the same case, also attended the meeting.The leaders of coalition parties had reiterated their support for the prime minister and decided to accompany him to the court. – Dawn