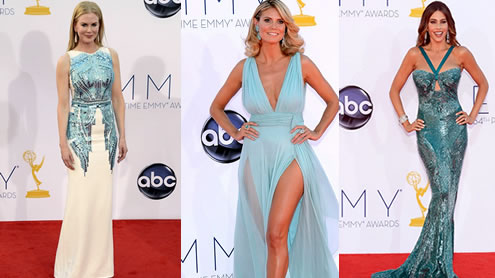 It was a big night for her show as Modern Family took four gongs. And fittingly Latina actress Sofia Vergara triumphed in the style stakes too. The stunning actress stole the show as she took to the red carpet in easily the most dazzling dress of the night at the 64th annual Emmy Awards in Los Angeles.

While her comedic turn didn’t garner a separate award, Sofia certainly dazzled as she celebrated alongside her award-winning co-stars Eric Stonestreet and Julie Bowen. The Colombian beauty, who has just celebrated her 40th birthday, showed off her supermodel statistics in the glitzy Zuhair Murad gown with a mermaid tail finish and reverse-halter neckline. Flirting with Ryan Seacrest, who was hosting the arrivals for E!, she said: ‘Do you think I made the right choice?’ – before wriggling in front of him while putting on a show for the cameras. The New Year’s Eve actress, currently engaged to Nick Loeb, also looked like a diva as she arrived with a huge entourage of 20 people – but all of whom were her family rather than hired security.

Heidi Klum and Nicole Kidman also took inspiration with the colour, rocking very different interpretations but looking equally as ravishing and A-list material. Project Runway beauty Heidi, 39, opted for an incredibly low-cut Alexandre Vauthier frock, complete with a thigh-high split, saying she was drawn to the creation because of the ‘sea foam’ colour. For her hair, stylist Oribe Canales said: ‘The inspiration for the style is a combination of the Seventies and Nineties. Decedent but sweet, soft but severe.

Meanwhile Nicole, who attended with husband Keith Urban, wore a beautiful white Antonio Berardi dress with a large sequin reversed wing design, together with Fred Leighton jewels. Speaking of her busy schedule, the Australian actress told Seacrest: ‘I’m in France this Christmas playing Grace Kelly [in the film Grace of Monaco]. ‘I’m going to get in trouble from the director [Olivier Dahan] for going back sunburned because she was pale.’ – Dailymail