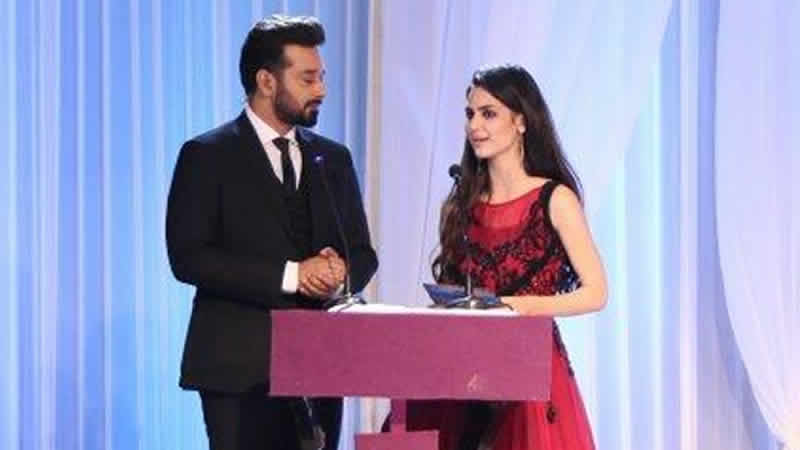 ARY Digital Network set forth the 1st ARY Film Festival which ended on 7th of May, 2017 with a star-studded closing night hosted by multitalented Faysal Qureshi and beautiful Madiha Imam.

The event was attended by the top celebrities and personalities of the media and film industry. Amazing performances by Sheema Kirmani, Sanam Marvi and Hamza Qawwal along with a stand-up comedy act by the social media star Danish Ali. The 3 day festival screened 33 films, which were shortlisted from around 400 entries received from all over the world. Award for Best Story Feature Film was given to ‘Choora Ek Pratha’ and Best Short Film (Silver Category) to ‘Amrita & I’, both were screened in collaboration with Delhi International Film Festival. Purple Category Excellence in Documentary Feature was given to Sharmeen Obaid Chinoy for her film ‘Song of Lahore’. Anjum Shehzad’s ‘Mah e Mir’ won the award for Best Film – Feature.

Salman Iqbal, President & Founder, ARY Digital Network, in his message about the festival said, “It has been our primary objective since the establishment of ARY Films to develop and foster the film industry in Pakistan. We have now embarked on yet another journey with the first ARY Film Festival, whereby we will provide a break to new and creative filmmakers from Pakistan and around the world to come showcase their talent and get known for their efforts. This is our first year for the festival and we intend to make it bigger and better in the years to come”.

The ARY Film Festival Director and SVP Marketing @shehzadhkhan along with the Production Head Mr. #ObaidKhan with their teams #AFF pic.twitter.com/FYfVaZp2s3

Presented by Italiano and powered by Rooh Afza, the ARY Film Festival did special collaborations with American Film Showcase and Delhi International Film Festival. It was held from 4th to 6th May 2017 at the Cinepax Cinemas, Ocean Mall, Karachi.

The aim of ARY Film Festival is to provide a vital platform for the youth and filmmaking enthusiast to come together and celebrate their passion for the art form, creating an opportunity to set-up a forum where renowned names from the film and media industry will be able share their knowledge with the participants.