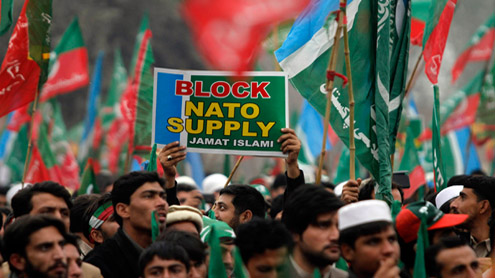 The Jamaat-i-Islami on Monday complained the Pakistan Tehreek-i-Insaf had unilaterally ended the Nato blockade in the province. In a statement issued here, JI provincial spokesman Israrullah Khan said PTI usually took decisions on important affairs without taking allies into confidence. “The governments aren’t run in this manner,” he said. The JI leader said Pakistan Tehreek-i-Insaf chairman Imran Khan had announced end to the Nato blockade in the province without taking the party’s allies, JI and Awami Jamhoori Ittehad, into confidence.

He said the Sehat ka Insaf programme was a provincial government plan but it had been marketed with the name of PTI. Mr Israrullah said there were many instances of PTI ignoring its allies. He said he was hopeful that PTI would avoid taking decisions on its own and take allies into confidence so that the government affairs could run successfully in the province.   Dwan