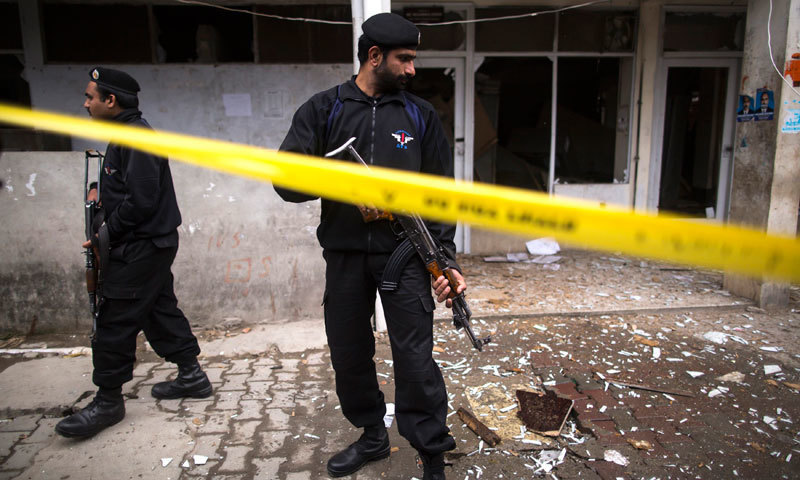 A three-judge bench of the Supreme Court on Wednesday asked the federal government to consider enhancing the compensation money to the heirs of people killed in a suicide attack on the district courts complex of the city in March this year.

Chief Justice Nasirul Mulk, who headed the bench, suggested so on the plea made by a lawyer on behalf of the 11 victims of the attack, including an additional sessions judge. Justice Gulzar Ahmed on the bench made the telling comment that providing a safe place to the district courts would have averted the incident and payment of compensation. “Had only Rs5 million been spent to develop proper infrastructure to secure the District Court complex, such incident could have been prevented,” observed the judge during the suo motu proceedings into the devastating attack on the courts complex in F-8 Markaz on March 3.

Recommendations made by Justice Shaukat Aziz Siddiqui of the Islamabad High Court as head of the inquiry commission that probed the terror attack figured in the proceedings. His inquiry report highlighted the need of adopting a clear determination by the government on the internal security policy because, it said, “it is directly linked and connected to the external security policy of the country”. On Wednesday, the apex court called for a comprehensive report from the government about action taken against the delinquent police officers who failed to perform despite the fact they were on duty when the incident occurred. President Islamabad High Court Bar Naseer Kiani told the court that the government had paid over Rs10 million each to the heirs of victims who were in the government service but only Rs500,000 to the family of Advocate Chaudhry Zulfikar who was gunned down by unidentified assailants outside his house on May 6, 2013.

He pleaded that the court orders the government to implement the recommendations made by Justice Aziz commission and increase the compensation money for the lawyers. Deputy Attorney General Sajid Ilyas Bhatti informed the court that the government had paid Rs10 million each to the heirs of slain Additional Sessions Judge Rafaqat Awan and a court official Mian Muhammad Aslam. Overall the government had allocated Rs30 million to pay compensation among the victims. In its recommendation, Justice Aziz had suggested that the heirs of the lawyers who lost their lives in the incident should be paid a compensation of Rs10 million whereas the injured be given Rs500,000 each because the State failed to protect them.

Justice Aziz noted in his report that foolproof security could not be ensured at the court complex because it is located in the midst of shopping plazas, hotels and grocery stores, with some courts sitting next to the shops. In his words the landscape does not depict a decent and graceful seat of justice. There is no mechanism to cordon or provide foolproof security as the chambers of lawyers are scattered around the F-8 Markaz upto the football ground at the end of the Markaz. Even the security arrangements made by the police and district administration after the March 3 incident do not provide complete safety to the lawyers, the courts nor the litigants. Justice Siddiqui had suggested to immediately move the district courts to some safer place.

Only walled, cordoned premises with proper security surveillance should house such a complex. He also suggested revisiting organisational and security doctrine by the Islamabad police by giving focal emphasis on countering terrorists. The training and capacity building of the police should be enhanced to meet with the modern day challenges besides the entire police force, deployed for any purpose, should be trained to counter terrorism. The command structure should also be simplified in a sense to ensure timely response by the police to any terrorist activity besides the sensitive post of police command should be given to professional and competent officers than on affiliations or nepotism, he said. -dawn