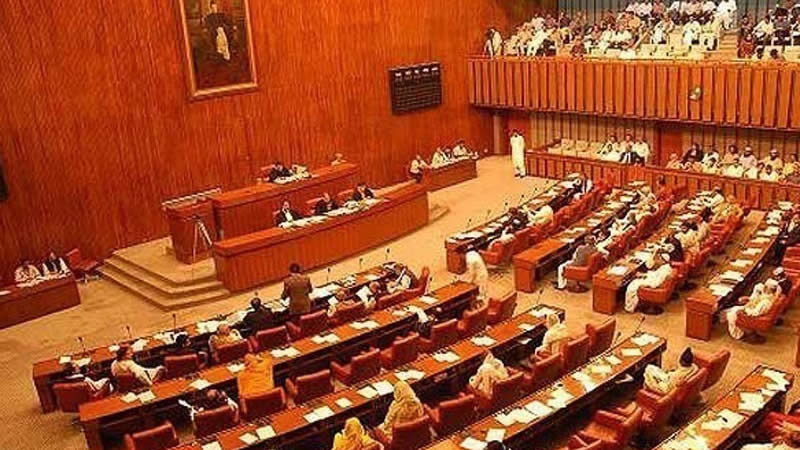 The 104-member Senate, where the opposition enjoys majority, on Tuesday rejected two FATF-related bills after Leader of the House Dr Shahzad Waseem refused to tender an apology for remarks that he made against the opposition leadership last week.

The Anti-Money Laundering (Second Amendment) Bill and the Islamabad Capital Territory (ICT) Waqf Properties Bill, passed by the National Assembly a day before, were rejected through a voice vote after the opposition linked its cooperation to retraction of Mr Waseem’s remarks and an apology by him and the government side accused the opposition of trying to blackmail it. The bills will now be taken up for voting at a joint session of parliament.

What made the environment more tense was Dr Waseem’s stance that he stood by his words and insistence that he had only narrated facts.

Not surprisingly, the opposition’s attitude drew an immediate, strong reaction from Prime Minister Imran Khan who issued a series of tweets to attack the opposition parties.

Imran lashes out at opposition, says no NRO for them; PPP, PML-N defend their stance

“Today in Senate the opposition defeated 2 critical FATF-related bills: Anti Money Laundering & ICT Waqf bills. From day one I have maintained that the self-serving interests of the opposition leaders & the country’s interests are divergent. As accountability noose has tightened,” he said, adding, “the opposition ldrs have become desperate to save their corrupt money by trying to prevent parliament from functioning; by seeking to undermine govt’s effective Covid 19 strategy — a recognised global success story — & now by trying to sabotage Pak efforts to exit FATF grey list.”

The PM continued: “Opposition tries to hide behind facade of democracy to protect their loot & plunder. To blackmail for NRO by defanging NAB, they would even have Pak put on FATF black list to destroy nation’s economy & increase poverty. They keep threatening to bring down govt unless given NRO.

“Let me make clear: No matter what happens, my govt will not allow any NRO as it would be betrayal of nation’s trust in holding plunderers of public wealth accountable. Musharraf gave NROs to the 2 pol ldrs which quadrupled our debt & destroyed economy. There will be no more NROs,” he declared.

Speaking in the house on Wednesday, Dr Waseem had not only targeted the religious parties, but also attacked the PPP and the PML-N despite the fact that the two parties had supported the government on the FATF-related legislations.

Mr Waseem had said that Pakistan was already on the FATF grey list when the PTI came to power due to bad policies of previous governments.

Amid noisy protest by opposition members, he had said everyone knew the people who were facing money-laundering charges and appearing in the courts.

Responding to the opposition’s insistence for withdrawal of his remarks on Tuesday, Mr Waseem said he had not named anybody. Some opposition members however said he did name Shahbaz Sharif and Asif Ali Zardari.

At last Mr Waseem said he had no intention of hurting sentiments of anybody, but the opposition was not ready to accept anything short of an apology.

The house also witnessed a heated debate on the discretionary power of the chairman to allow the law minister to table a motion seeking suspension of rules to introduce the bills at once.

The chairman finally rejected the opposition’s view that it was for the house to decide whether this was to be allowed or not.

The tension between the government and the opposition has been continuing for days over allegations that top opposition leaders were seeking NRO.

Information Minister Shibli Faraz on Sunday had posted on his official Twitter account the drafts of the proposals made by the opposition parties for bringing changes to the country’s accountability laws, terming them a “proof” of Prime Minister Imran Khan’s claim that the opposition had tried to make a bargain with the government during negotiations on the FATF-related legislation.

In his tweet, the minister had said he was posting the documents as “the PML-N limited” had been asking the government to tell the nation as to who had sought an “NRO”.

Earlier the opposition staged a walkout from the Senate as a mark of protest against suspension of question hour session, saying the government was evading parliamentary accountability.

The opposition protested at the start of the session when Senate Chairman Sadiq Sanjrani asked the leader of house to move the motion under the rules of business that question hour session should be suspended for today (Aug 25).

The Leader of the Opposition Raja Zafarul Haq was the first one who raised the issue and said it had been an old parliamentary tradition that questions were asked . “The leader of the house should inform why the question is being suspended and why the government is running away from parliamentary accountability?” questioned PPP stalwart Mian Raza Rabbani.

As the leader of house moved the motion, the opposition staged a walkout while raising slogans of “no, no”. Mr Sanjrani assured the members that there would be a regular question hour session from onwards and it was suspended only for today as the house was not scheduled to meet today but the session had to be held because two FATF-related bills came from the National Assembly at the eleventh hour.

Meanwhile, PPP’s Sherry Rehman pointed out the quorum and the chairman ordered the staff to ring bells thrice as the house was not in quorum. Later, the chairman adjourned the house for minutes as only 24 members were present in the house when the last count was made.

The house resumed its business after the break as the opposition had ended its boycott.

Soon after the prime minister’s tweets, both the PPP and the PML-N defended their act of opposing the legislations.

Sherry Rehman while replying to the PM, also through tweets, said they had opposed the bills as powers to arrest without warrants were being given to the police and investigators, saying “this is neither required by FATF nor is it defensible in any even the most illiberal democracy.”

“These laws are being pushed as draconian laws,” she said. Moreover, she added, FATF was being used “to expand the scope of NAB to witch hunt the opposition”.

PML-N’s vice-chairman Shahid Khaqan Abbasi, in a statement, said that opposition had foiled the attempts by “puppet and selected chairman (Senate)” to get the bills passed through illegal means. He vowed that they would not allow any legislation against the Constitution and fundamental rights of people.

Mr Abbasi declared that the opposition would block the bills in the present form, if the government made attempt to bring them again in the parliament.