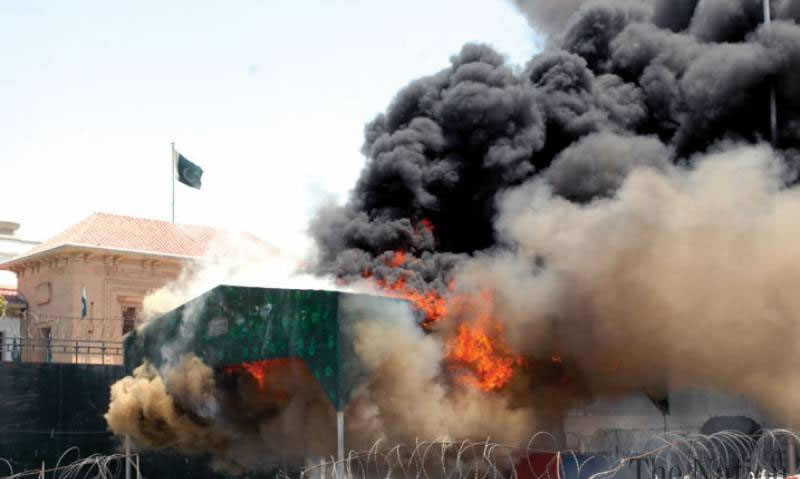 Violent protests by lawyers against law-enforcers over the killing of the Daska Bar Association president and his colleague continued on Tuesday as the black coats attacked the Punjab Assembly building and set its security shed (made of fibreglass) on fire. The PPP, Pakistan Tehreek-i-Insaf and other parties also held peaceful protests across the province and called for immediate action against the culprits. The government constituted a joint investigation team (JIT) comprising representatives of law enforcement/security agencies to investigate the killings. The government withdrew its earlier request made to the Lahore High Court for nomination of a judicial commission on the matter. Daska police registered a case against unidentified people for ransacking the offices of DSP, TMA, Civil House and other public buildings during Monday’s protest. Talking to journalists, Punjab IG Mushtaq Sukhera said the killing of the lawyers was an individual’s act, asking the legal fraternity not to blame the entire police force for the unfortunate incident. After the formation of the JIT, lawyers should end their protests, the IG said. He assured the lawyers that all requisites of justice would be met. Meanwhile, Daska Bar Association president Rana Khalid Abbas and lawyer Irfan Chohan were laid to rest in Daska tehsil on Tuesday.

A large number of lawyers, politicians and members of civil society attended the funeral. A complete strike was observed and Ghaibana Namaz-i-Janaza were held in bar associations of Lahore, Sialkot, Daska, Gujranwala, Faisalabad, Sahiwal, Vehari and Bahawalpur. Lahore High Court Chief Justice Manzoor Ahmad Malik and other judges attended one such prayer in the High Court Bar Association. They also visited Mayo Hospital to inquire after the health of injured lawyers. Talking to lawyers, Justice Malik said the law had taken its course and the culprits would be brought to justice soon. The Punjab Bar Council called a strike and rallies for two days. In Lahore, lawyers held a rally on The Mall and forced traders to shut their shops. They also manhandled policemen and harassed motorists and passersby. They damaged signboards, banners and hoardings carrying pictures of PML-N leaders and chanted slogans of “go Nawaz go” and “go Shahbaz go”. Some lawyers attacked a police mobile van parked outside the judges’ gate in the LHC and snatched mobile phones from the driver and a policeman. The Metro Bus service was partially suspended from MAO College station to Shahdara because of protests.

There was a traffic jam on all roads adjacent to The Mall lasting for hours. As there was no police deployment on roads, lawyers did what they liked. Rangers were deployed inside the LHC and the Punjab Assembly. The lawyers tried to break into the assembly building but failed. The frustrated lawyers then damaged security cameras and set on fire a fibreglass shed installed at the entrance for security personnel. Later, Rangers took control of the situation outside the assembly. The unbridled lawyers scuffled with Lahore High Court Bar Association President Pir Masood Chishti when he tried to calm them down. They called him a representative of the government. In Daska, traders observed a complete strike to mourn the death of the lawyers killed on Monday. Paramilitary troops patrolled all main and inter-city roads. During the protest, lawyers thrashed an official of the Special Branch. The Sialkot District Bar Association called for immediate suspension of DPO Dr Shahzad Asif and acting DCO Adnan Mehmood Awan.

The bar cancelled the membership of Defence Minister Khawaja Mohammad Asif for “not taking action against the policemen involved in the killing of the two lawyers”. In Muzaffargarh, lawyers held a rally and blocked main roads. They besieged the DPO office and chanted slogans against police. In Bahawalpur, lawyers marched on DCO Road and Baghdad Road, blocking traffic. No police contingent was deployed to maintain law and order during the rally. The Human Rights Commission of Pakistan condemned the killing of the two lawyers by police. Its chairperson Zohra Yousuf urged the government to provide justice to the victims and take action against the perpetrators. She also urged the lawyers to remain peaceful and avoid violence.