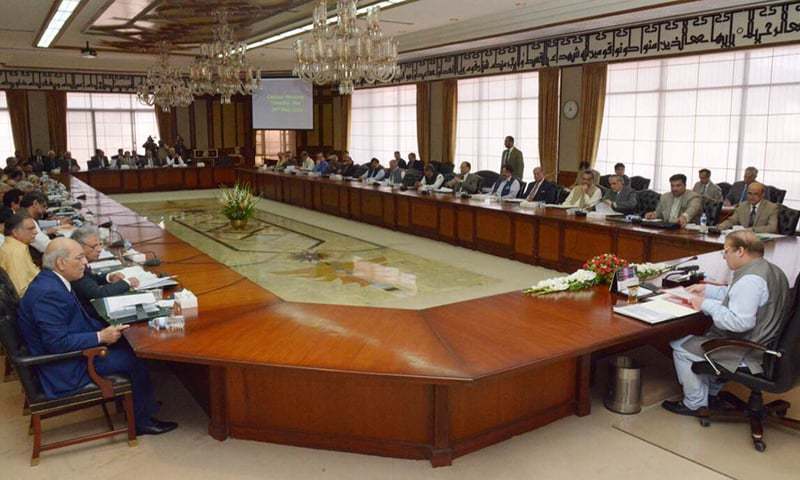 Prime Minister Nawaz Sharif cautioned his economic team on Tuesday against setting unrealistic targets for the next financial year, 2015-16. He was chairing a budget strategy meeting for the upcoming financial year.

A participant quoted the PM as saying, “It is advisable to only talk about those things which the government can achieve at the end of the day.” He was perhaps referring to lessons learnt from past experiences of unsuccessfully following up on government claims to end load shedding within six months of taking over. Throughout the meeting, sources said, the PM kept warning his ministers “if you fail to achieve your targets it will only bring embarrassment to the government, so be careful”. For example, Finance Minister Ishaq Dar projected that the Gross Domestic Product (GDP) growth rate for the next financial year would be 6 per cent. At this, the PM said that 5pc or, at most, 5.5pc was enough because “if we fail to show 6pc growth, the people will criticise us”. The government has set an export target of around $25 billion for the next financial year. Commerce Minister Khurram Dastgir, who will be the one looking to achieve this target, was asked by the PM, more than once if he was comfortable with the figure.

“This target is meant to be practically achieved, not just presented to the general public,” the prime minister was quoted as saying to Mr Dastgir. The PM also advised his economic managers to increase the tax base instead of taxing the already taxed. There were suggestions, according to a source, to impose extra taxes on the effluent class, which is already part of the tax net. During the meeting, Petroleum Minister Shahid Khaqan Abbasi pleaded for an increase in gas tariff, arguing that the sector was suffering due to the low rates that the government charged domestic consumers. Though the PM agreed with Mr Abbasi’s argument, he refused to include his suggestion in the federal budget. “If we increase the prices of gas in the budget, the opposition will not spare us,” he said.

After the meeting, the PM Office’s Media Wing issued a statement quoting the PM as saying: “The next budget should focus on the welfare of the common people so that the process of transferring the fruits of growing economic stability of the country was further strengthened. Out of the box solutions must be explored in designing tax proposals for broadening the base to increase revenues. A system should be devised which results in reduction of corruption and encourage voluntary compliance from taxpayers.” The cabinet meeting noted that while benefits of mega projects that were in the pipeline would start unfolding in the next five to ten years, immediate measures were needed to encourage investment in the private sector.

The PM directed that the overall prosperity of the masses should be the top priority in the next budget and said that the current trend of GDP growth should continue to increase employment opportunities for the youth. “We must address issues [in the] agriculture and manufacturing sectors to boost growth and work day in and day out to further strengthen the country’s economy,” he said. The cabinet, after detailed discussions, approved the Budget Strategy Paper 2015-16.