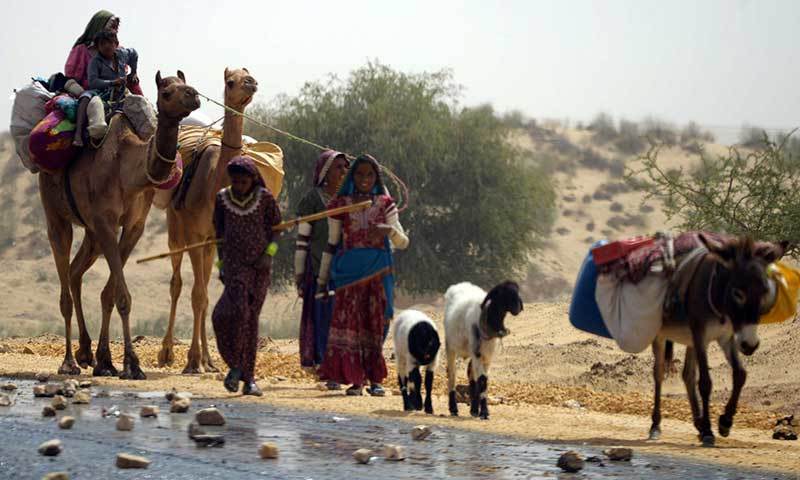 Unrelenting drought-like conditions has seen the deaths of seven malnourished infants in Tharparkar district on Monday whereas one infant died in Civil Hospital Umerkot. In the past 24 hours, a total of 14 people have died in Tharparkar.

The latest number of reported deaths has taken the cumulative figure to 80 in the past 45 days in Tharparkar whereas 61 infants have died over a span of three months in Umerkot, Dawn learnt today. In a recently released report by the District Health Department in Umerkot, 85 people have died in Umerkot out of which 61 are said to be infants. The collated death toll in 2014 is reported as 470. The deaths represent those areas where journalists are able to gain access. However, deaths of scores of infants, who have died in villages and private clinics, cannot be reported.

Tharparkar is spread over 22,000 square kilometers, with a population of about 1.5 million people. At an average, every third year is a drought year. The region faces famine at least once every decade. More than 80 per cent of the people’s livelihood is dependent on rain-fed agriculture and livestock. In fact, livestock, fully or partially, contributes to the economy of every household in the district.

The dry spell in Tharparkar district — which has been ongoing over the last three years (2012-2014) — continues to deprive local growers of their main crops: cluster beans and millet. And the prolonged drought conditions have forced different community groups, especially those who maintain small landholdings and family livestock, to migrate to neighbouring areas in search of livelihood.

Sindh Chief Minister Syed Qaim Ali Shah brushed aside last week the allegations of slackness, negligence and incompetence of his government in meeting the challenge of the Tharparkar drought and said it had realised the situation in November and started taking measures to meet the situation. The chief minister, who was winding up the discussion on a motion regarding the situation in Thar, said there was little substance in reports of deaths of children in the district due to drought.

He asked if the deaths were caused by the famine, why only infants and not a single child of 10 years or above had died from hunger. “There is no proof of a single death from hunger,” he said. An inquiry report over the mismanagement of the recent drought situation in Tharparkar district had also revealed the internal rifts and lack of coordination within the different tiers of the Pakistan Peoples Party and the provincial government. -dawn