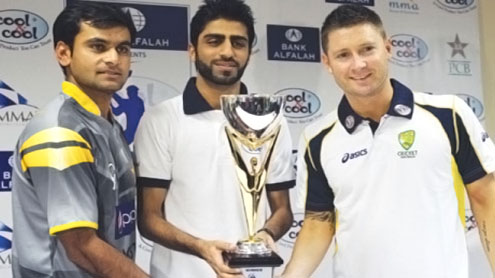 SHARJAH: Pakistan and Australia will seek to reverse their recent poor fortunes amidst oppressive heat and unusual timings in their limited over series which starts here on Tuesday.

Pakistan, who have not beaten Australia in a one-day series since 2002, have lost 4-1 to England and 3-1 in Sri Lanka, slipping to sixth in the one-day rankings. Australia, who slid to fourth from number one for the first time in three years after a humiliating 4-0 defeat in England last month, not only face an opponent laced with quality spinners but also with high temperatures.

Pakistan, who are playing their home series on neutral venues because of security fears in their country, was forced to host the series in the extreme hot conditions in United Arab Emirates after Sri Lanka backed out as alternate. Pakistan also considered Malaysia as the option but threats of rains ruled out that option too, forcing them to start the one-day matches at 6pm in the evening and finish them at 1:45 am the next day. Australia had the taste of conditions and timings in their 66-run win over Afghanistan here on Saturday. But Pakistan’s vice-captain Mohammad Hafeez believed both teams will have to cope with the conditions.

“We have to deal with that, as professionals we are ready to play and although the timings are odd but we will manage once the series gets underway,” said Hafeez, who is also Pakistan’s Twenty20 captain. The three one-day matches will be followed by as many Twenty20 internationals. Hafeez hoped Pakistan will not think about the past. “We always believe in performing well in every series. The history (not beating Australia since 2002) is also on your mind but we are not bothered about it and start with an aim of doing well,” said Hafeez.

Pakistan will rely heavily on their spinning trio of Saeed Ajmal, Hafeez and Shahid Afridi, more so because they left out frontline paceman Umar Gul for the one-dayers. “Our spinners got some success here against Sri Lanka and England with Ajmal, being one of the best in the world, and Afridi, so we have got good spinners for the conditions and hopefully they do well again,” said Hafeez. Pakistan also left out experienced Younis Khan but included wicket-keeper batsman Kamran Akmal to supplement the fragile batting. Australian captain Michael Clarke sought consistency in his team’s performance.

“Both teams are keen to get some consistency back into the one-day game. It’s just about performing consistently, getting out and playing some of your best cricket. That’s our goal as a team: to make sure we are playing as well at home and away.” Clarke said it will be a hard fought series, with Pakistani spinners holding the center stage.”I know it’s going to be a hard fought contest against Pakistan. I think spin in general is going to be a factor. To have success in these next three one-dayers, I think it is going to come down to whoever bowls spin the best and whoever plays spin the best will win the series. “Pakistan are a very good one-day team.

I think their greatest strength is definitely going to be their spin bowling. They got some really good spinners in conditions where scoring against spin bowling is going to be quite tough.” Australia have left-arm spinner Xavier Doherty in their squad to add to leg-spin of Steve Smith, and off-spinners Glenn Maxwell and David Hussey and part-timers in Clarke.
Teams and match officials