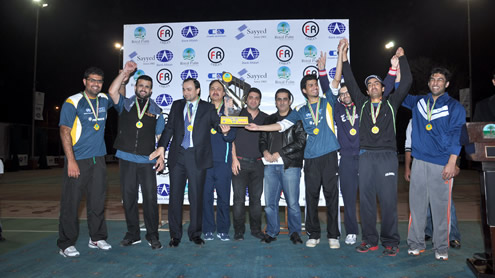 The 10th Royal Palm Flood Lit Cricket Tournament was played over 7 days with the participation of 16 teams and the preliminary rounds were contested on league basis and after some real hot contests, four teams with all round cricketing ability and appreciable level of fitness and commitment emerged as the semi finalists.

Semifinal is did produce fireworks and thrilling encounters were witnessed with the Royal Vikings team losing out to the outfit of Lahore Lions in the first semi final and in the second semi final Indus Warriors crushed their opponents Indus Chargers As for the final encounter between Lahore Lions and Indus Chargers ,the hero of the event turned out to be Usman Javed who bowled exceptionally well and succeeded in curbing the shot making ability of the opponents and when it came to batting his handling of the opposition bowling was amply adroit and through masterly batting sparkled with flow of sixes.The members of the winning team were Tanveer Karamat, Junaid Ahmed, Ahad Tanveer, Usman Javed, Omer Subhan, Omer Salamat, Junaid Khawaja and Usman Pervaiz.

At the conclusion of this six day event, Faisal Munir of Chawla Aluminium and Omer Mir of Royal Palm awarded prizes to the winning and runners up teams.