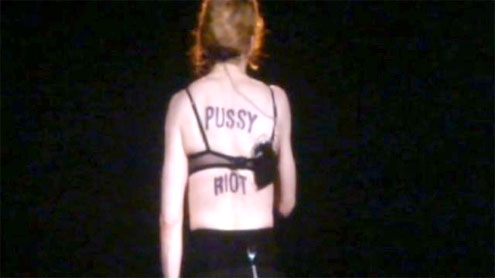 A Russian deputy prime minister has launched a tirade against the singer, Madonna, after she spoke out about the trial of a female punk protest group.

Writing on Twitter, Dmitry Rogozin accused the singer of moral lecturing, telling her: “Either take off your cross, or put on your knickers.”Madonna has called for the release of three members of the band, Pussy Riot, on trial for “hooliganism”.During her Russian tour, she has also spoken out in support of gay rights.Using his official Twitter account, Mr Rogozin wrote: “Every former w…. seeks to lecture everyone on morality as she gets older. Especially during tours and gigs abroad.”

The BBC’s Daniel Sandford in Moscow says the comment has been widely interpreted in Russia as being directed at Madonna. Mr Rogozin did not write the word in full, but there is little doubt in Russia that he was using a version of the word “whore”, considered one of the most offensive terms that can be used against a woman, our correspondent adds.During her show in Moscow on Tuesday, Madonna told her fans the three members of Pussy Riot had done something courageous and that she was praying for their freedom.

“I know that everyone in this auditorium, if you are here as my fan, feels they have the right to be free,” she said.She also took off her shirt to reveal the band’s name written on her back.Maria Alyokhina, Nadezhda Tolokonnikova and Yekaterina Samutsevich are accused of hooliganism after staging a flashmob-style performance of a song attacking Russian leader Vladimir Putin in front of the altar of Moscow’s main cathedral on 21 February.

They said the song. which parodied a Christian prayer, was a reaction to the head of the Russian Orthodox Church, Patriarch Kirill, publicly backing Mr Putin in elections.The judge is expected to start delivering her verdict on 17 August and there are fears among opposition activists that the trial is part of a crackdown on dissent since Mr Putin’s return to the Kremlin, following the biggest anti-government protests in recent Russian history.

Madonna’s show in St Petersburg on Thursday evening is expected to spark further controversy after she pledged to show support for the city’s gay community.Officials in St Petersburg said they would be closely monitoring for the show for “homosexual propaganda”.A spokeswoman for city councillor Vitaly Milonov said the singer could face a fine for violating a local law passed earlier this year which makes it a crime to “promote homosexuality” to minors, although homosexuality itself is not illegal in Russia.”We should not allow the imposition here in Russia of Western values that Madonna promotes,” the AFP news agency quoted the spokeswoman as saying.

Religious and pro-Kremlin groups are planning to protest outside the concert.Some gay rights groups have also criticised Madonna for staging the shows, saying she could better have supported them by cancelling the tour.”In our opinion, it is not enough to say a few words in support of homosexuals between two songs during a concert,” activist Yury Gavrikov told AFP.”If you position yourself as a defender of human rights then you need to do something more substantial.” – BBC

Top Mexican 'drug queen' Sandra Avila extradited to the US