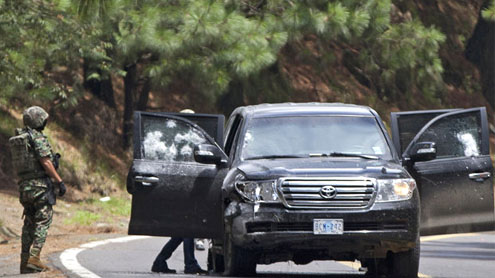 MEXICO CITY: Mexican authorities are trying to sort out why a U.S. Embassy vehicle was ambushed by federal police on a rural back road in mountains south of the capital, leaving two U.S. government workers wounded.

Officials from both nations said federal officers were chasing criminals Friday morning when a hail of bullets was fired at the embassy sport utility vehicle carrying the two employees and a Mexican Navy captain.Federal police earlier said men in four vehicles had fired at the embassy SUV, and a Mexican Attorney General’s Office spokesman confirmed Saturday that all were federal police units. He could not be named because he was not authorized to speak on the record.

The official said that Mexico’s top police official, Public Security Secretary Genaro Garcia Luna, went to the site of the shooting, indicating the sensitivity and tension over a situation that involved an attack not only on U.S. officials, but on Mexican Navy personnel as well.The U.S. Embassy took nearly 12 hours to issue a statement Friday, but described the incident as an “ambush.”U.S. officials did not identify the wounded employees or their assignments or agencies, saying only that they were heading to a military training base south of Mexico City and traveling with a Mexican naval captain, who was not seriously injured.The Mexican official said 12 police officers had been detained.

The two American workers were taken to a hospital in the nearby resort city of Cuernavaca. One had a gunshot wound in his leg and the other was wounded in the stomach and a hand, said a Mexican government official who spoke on condition of anonymity. Hospital officials in Cuernavaca said the wounded were later transferred to a Mexico City hospital in stable condition.

Federal police said Friday the officers were in the area looking for criminals, but it did not explain what happened.”Apparently the police were looking for some bad guys and they ran into each other,” said a U.S. official, who agreed to discuss the incident only if his name was not used. “It looks like it was just a bad mistake … they just shot and kept shooting.”

The Mexican newspaper Reforma reported that angry Navy personnel at the scene said that the SUV was clearly the target. It appeared to be armored and had diplomatic plates.The shooting is an embarrassment for a federal police force that President Felipe Calderon greatly expanded under his term from 6,000 to more than 35,000 officers and one he has touted consistently as highly vetted, better trained and more professional than previous federal polices forces, who gave rise to the long-standing reputation for corruption and bad behavior.

But problems have persisted. Just last week, Mexico announced that it replaced 348 federal police officers assigned to security details at the Mexico City International Airport in the wake of the June 25 shooting deaths of three officers by their fellow officers. All were believed to be involved in trafficking drugs through the terminal.The U.S has consistently supported the force’s leader, Garcia Luna.Mexico security expert Ernesto Lopez Portillo said the situation now presents a dilemma for the U.S.

“The evidence is sufficient to conclude that the federal police have chronic, grave problems,” Lopez Portillo said. “My hypothesis is that the U.S. will apply pressure (about the shooting) through diplomatic channels but not publicly.”The embassy SUV took dozens of bullets, many in the passenger-side window, which didn’t shatter and appeared to be bulletproof glass.

Mexican officials said the Americans’ SUV was driving along a stretch of dirt road off a highway that connects Mexico City to Cuernavaca when vehicles came up behind them and men displayed their weapons. The U.S. driver of the Toyota tried to escape, but three other vehicles joined the original one in pursuing them down the dirt road and onto the highway.Passengers in all four vehicles fired, and the Mexican naval captain called for help, government officials said. Federal police officers and Mexican soldiers then showed up on the road.The SUV stopped on the highway, but it wasn’t clear if the driver was halted by the chasers or stopped because of the wounds.

The area was cordoned off and guarded by more than 100 heavily armed marines and soldiers, and the highway was closed for hours. Investigators examined what appeared to be shell casings.The U.S. Embassy said it was helping Mexico’s government in its investigation of the incident. It said the wounded were not agents of the Drug Enforcement Administration or the FBI.”They are receiving appropriate medical care and are in stable condition. We have no further information to share at this time,” said Victoria Nuland, a State Department spokeswoman in Washington.

U.S. Rep. Henry Cuellar, a Democrat from Texas who closely follows the affairs with Mexico, said both countries appeared to be working together to find out what went wrong.”If the Mexicans are cooperating with U.S. officials to find out exactly what happened here then I don’t think this will affect the U.S.-Mexico relationship,” he said.Attacks on diplomatic personnel in Mexico were once considered rare, but this was the third shooting incident in two years.

In 2011, a U.S. Immigration and Customs Enforcement agent was killed and another wounded in a drug gang shooting in northern Mexico.A drug-gang shooting in 2010 in the border city of Ciudad Juarez killed a U.S. consulate employee, her husband and another man.While Mexico City has largely been spared the drug violence that hits other parts of the country, Cuernavaca has been the scene of drug gang turf battles involving remnants of the Beltran Leyva cartel. – Yahoonews