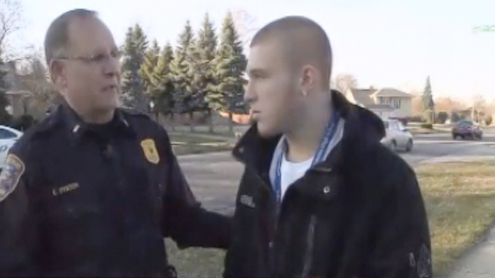 It’s embarrassing enough when something bad happens to you if there are people around to witness it, but take that to another level: Imagine getting arrested in front of a news crew while you’re being interviewed.

That’s exactly what happened to 18-year-old Reilly Neuklis, who was arrested shortly after the car he was driving collided with a school bus on Tuesday afternoon.Local ABC affiliate WBND reporter Jessie McDonough was interviewing Neuklis about the crash when an officer arrested him for being possibly under the influence of marijuana. Apparently, a tipster alerted police at the scene that Neuklis may have thrown out drug paraphernalia in a nearby trash can after he hit the bus.

After the officer located the drug paraphernalia, he displayed it for the camera and explained to Neuklis, “In Indiana, it is illegal to have metabolites in your system while you are driving.” The interview was cut short, and the officer took Neuklis to the hospital to be tested for drugs. One other student who had been in the car with Neuklis was injured and taken to the hospital, but no one else reported injuries.Unfortunately for Neuklis, his embarrassment will now live on not just as a bad memory, but also in YouTube infamy. – Yahoonews