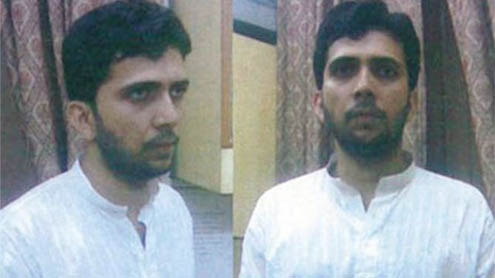 NEW DELHI: India announced Thursday the arrest of Yasin Bhatkal, one of the nation’s most-wanted men and the alleged co-founder of militant group the Indian Mujahideen, blamed for killing hundreds in a string of attacks.

Bhatkal, who is believed to be in his 30s, was arrested near the porous border with Nepal and is in police custody in the northern state of Bihar, Home Minister Sushilkumar Shinde said.”He is being interrogated,” Shinde told reporters in the capital New Delhi. “I cannot disclose which intelligence agencies were involved.”The banned Indian Mujahideen came to public attention in November 2007 following serial blasts in Uttar Pradesh state. It is accused of a number of attacks since including in Mumbai, Bangalore, New Delhi and Pune.

The group is thought to head a network of home-grown militant groups.Bhatkal was named as a co-conspirator over an attack on the German Bakery restaurant in the western city of Pune in 2010 when a bomb placed in a rucksack killed 17 people including five foreigners.Reports say Bhatkal was captured on CCTV footage in the restaurant planting the bomb shortly before the blast.His arrest on Wednesday evening is another success for the Indian security forces following the detention earlier this month of alleged top militant Abdul Karim Tunda, whom India considers to be a senior member of the LeT. It is not known if the two arrests are linked, but Tunda, who was also arrested near the Nepal border, has been cooperating with police, according to newspaper reports.

Former home secretary RK Singh said security forces had been working for years to catch Bhatkal, whom he called “one of the most active terrorists in the region”.  “I think we have made great strides in the past year and a half in arresting a number of their (Indian Mujahideen) operatives,” he told a news channel. “Catching a trained terrorist is very difficult and therefore I feel it is a great success.” Bhatkal, from the southern state of Karnataka, was arrested in 2008 in the city of Kolkata but was able to flee after being granted bail by officers who were unaware of his identity, the Times of India reported.

Ajit Kumar Singh, a research fellow at the Institute of Conflict Management in New Delhi, said the Bhatkal’s arrest would be a “big catch” but he also urged caution, saying the Indian police had a history of bungled operations. “The intelligence agencies deserve a huge pat on their backs if they have indeed arrested the right man,” he added.
The fact that two alleged senior militants have been arrested near the international border with Nepal shows that the Himalayan country was serving as a “safe haven to them”, he said.Nepal police spokesman Nawa Raj Silwal told AFP that Nepalese police were not involved in the arrest of Bhatkal.

The most recent deadly attack believed to have been mounted by the Indian Mujahideen came in February when twin bombs strapped to bicycles exploded in the city of Hyderabad, killing 16 people and wounding more than 100.It was also linked to bomb attacks on July 7 at Bodh Gaya, a UNESCO world heritage site revered by Buddhists. The blasts were suspected to have been staged in retaliation for violence against Muslims in Buddhist-majority Myanmar.
Police in Karnataka confirmed that the National Intelligence Agency (NIA) had communicated Bhatkal’s arrest.

“The Karnataka police provided information and photographs of Bhatkal to the NIA,” state inspector general of police Bhaskar Rao told AFP. Home-grown Islamic militant groups are still a relatively new menace for India.Recruits are drawn to the message of fighting for India’s economically disadvantaged Muslims and avenging religious riots such as those in Gujarat in 2002 in which more than 1,000 Muslims were killed, analysts say.As well as being banned by India, the Indian Mujahideen was labelled a “terrorist organisation” by the US State Department in 2011 which said it had carried out dozens of attacks and killed “hundreds of innocent civilians”.