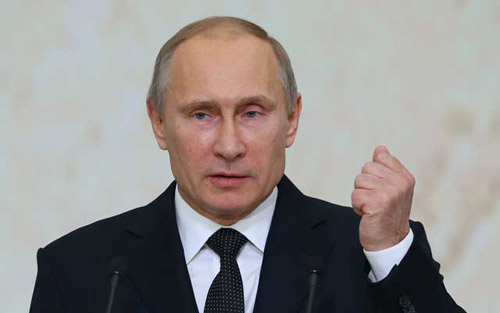 As violence worsened in Ukraine over the weekend, U.S. lawmakers appeared on the Sunday talk shows to call for new and harsher sanctions on Russia. Many U.S. officials believe the government of Russian President Vladimir Putin is orchestrating the widespread takeover of government buildings in east Ukraine by ethnic Russians who want to see their part of the country annexed by Russia.

Russia, which annexed the Ukraine’s Crimean peninsula two months ago after widespread protests reportedly backed by Russian agents, currently has tens of thousands of troops massed on the Ukrainian border. Over the weekend, the violence moved from the eastern part of the country to the southwestern port city of Odessa, where more than 40 people, mostly pro-Russian separatists were killed on Friday. Many of the fatalities were pro-Russian forces who burned to death after a building in which they were taking refuge was set on fire.

On Sunday, pro-Russian demonstrators in Odessa stormed police headquarters, apparently with the cooperation of a significant part of the police force, and freed dozens of their comrades who had been arrested for participating in the violence of the previous few days. The Barack Obama administration last week took a hard line on the issue of Russian interference in Ukraine, but put most of the emphasis on warning Russia not to interfere in parliamentary elections scheduled for later this month, or risk more severe sanctions than those already imposed on the country by the U.S. and European allies. Appearing on Fox News Sunday, New Hampshire Republican Sen.

Kelly Ayotte said waiting to see if the elections were hindered before introducing new sanctions was pointless. “They need to be imposed now,” she said. “The bottom line is if we wait until the elections it’ll be too late at that point. We already see the playbook of what happened in Crimea happening in eastern Ukraine and it’s time to impose tougher sector sanctions and to provide support for the Ukrainian military.” Hoping that the limited sanctions imposed so far will deter Vladimir Putin she said, ignores reality. “At this point, Russia is not getting the message,” she said.

The Russians are ignoring an agreement signed in Geneva two weeks ago that was designed to help end the crisis peacefully. “You’ve got Russian agents in Ukraine fomenting unrest and causing all the violence and creating a situation right now that warrants tougher sanctions from this administration.” California Democratic Rep. Adam Schiff was less demanding of urgent action, but seemed equally convinced that harsh sanctions were necessary. “Regrettably I think they are going to be necessary and we’ve got to inflict a heavy penalty on Russia for this kind of violation of its neighbor’s sovereignty,” he said. The U.S. Ambassador to Ukraine, Geoffrey Pyatt, appeared on CNN’s State of the Union, and said that the demonstrations erupting across the country are not representative of the feeling of the general public. Pyatt had visited Odessa not long before the violence on Friday.

“There’s nothing that I heard or saw while in that city which would explain what transpired Friday night. It suggests that somebody wanted this violence to explode the way it did and at this point the whole country is trying to figure out what happened, how to pull together, and how to make sure that those who are trying to divide the country do not succeed.” Asked if he believes Russia was behind the troubles in Odessa, Pyatt stopped short of a direct accusation. “We certainly believe that Russia is exercising influence inside eastern Ukraine. We don’t have evidence of a Russian role in the tragedy that transpired on Friday,” he said. He noted that Russia played a role in negotiating the release of seven observers from the Organization for Economic Cooperation and Development who had been taken captive by pro-Russia separatists in the eastern city of Slovyansk.

“Release of prisoners demonstrates that Russia has influence and can play a constructive role when it wishes to do so.” Also on CNN, Sen. Ron Johnson (R-WI) said that Russian propaganda had been extremely effective in scaring ethnic Russians in Ukraine, and said the response by the U.S. has, at this point, been too weak to deter Putin. “Nothing is going to stop him,” Johnson said. “I think it’s that kind of weakness that has given Vladimir Putin the signal that he can do these kind of things with impunity.” Interestingly, with Ukraine plummeting toward what looks increasingly like civil war, Fox and CNN were the only networks to focus major segments on the crisis there. ABC, CBS, and NBC elected to spend the majority of their time on the racist statements of Los Angeles Clippers owner Donald Sterling and the White House Correspondents Association Dinner, which took place Saturday night in Washington.