Malala leaves for London via Doha after four-day Pakistan visit 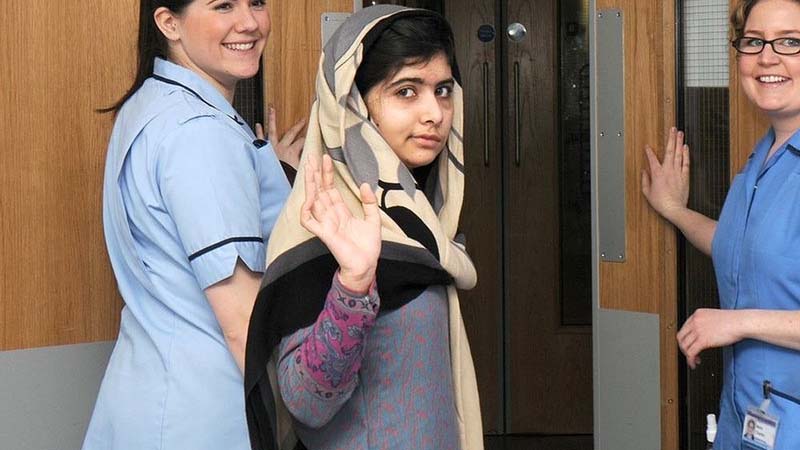 Nobel laureate Malala Yousafzai on Monday has left for London after a four-day-visit to Pakistan ended. The 20-year-old girl departed to Doha along with her family on a private flight. On early Thursday morning, Malala returned to Pakistan in her first visit since she was shot in the head by a Taliban gunman six years ago for advocating education for girls. During the visit, she met PM and visited her hometown Swat. She also launched campaign for Malala Fund working for the education of girls in Pakistan and other countries.

She also met with friends and family before visiting the all-boys Swat Cadet College Guli Bagh, some 15 kilometres (nine miles) outside of Mingora, the district’s main town. Mingora is where Malala’s family was living and where she was attending school on October 9, 2012, when a gunman boarded her school bus, asked “Who is Malala?”, and shot her. She was treated first at an army hospital then airlifted to the British city of Birmingham. Her near-miraculous recovery, and tireless career as an education advocate, have since turned her into a global symbol for human rights, and in 2014 she became the youngest person ever to be awarded the Nobel Peace Prize when she was just 17. The youngest ever winner of the Nobel Peace Prize in 2014, she has continued to be a vocal advocate for girls’ education while pursuing her studies at Oxford University.

Malala began her campaign aged just 11, when she started writing a blog — under a pseudonym — for the BBC’s Urdu service in 2009 about life under the Taliban in Swat, where they were banning girls’ education. In 2007, the militants had taken over the area, which Malala affectionately called “My Swat”, and imposed a brutal, bloody rule. Opponents were murdered, people were publicly flogged for supposed breaches of sharia law, women were banned from going to market, and girls were stopped from going to school. But it was only after the shooting, and a subsequent near-miraculous recovery, that she became a truly global figure. She opened a Twitter account on her last day of school in July 2017 and now has more than a million followers.”I know that millions of girls around the world are out of school and may never get the opportunity to complete their education,” Malala wrote at the time.