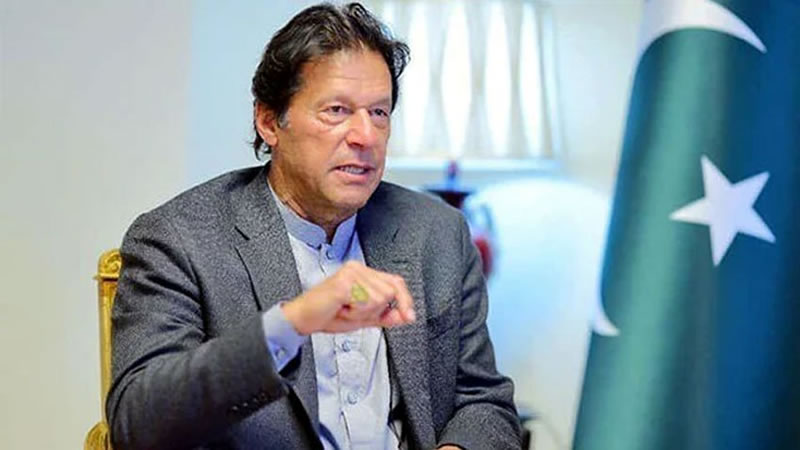 Prime Min­­ister Imran Khan on Wed­nesday highlighted the significance of peaceful poli­tical transition in Afgha­nis­tan after the departure of US forces from the neighbouring country for regional peace, connectivity and prosperity.

While addressing the concluding ceremony of second conference of the Parlia­mentary Assembly of the Economic Cooperation Org­a­nisation (PAECO) countries, the prime minister said: “It is imperative for the peace of entire region that there should be a pea­ceful transition in Afghan­istan, otherwise 1989-like chaos will occur when Sov­iet Union’s forces had left and everyone knows what happened after it.”

He called for tapping of immense potential and res­ources of the 10-member PAECO for collective regio­nal progress and prosperity. “According to estimates, the combined population of these countries stood aro­und 450 million, ‘making this region a powerhouse’,” he said.

The PM lauded the PAECO for passing a resolution to condemn atrocities of Israeli and Indian forces against the people of Palestine and held Kashmir. He appreciated “the unanimous adoption of Islamabad Declaration raising voice for the legitimate rights of the people of Indian Illegally Occupied Jammu and Kashmir and Palestine as enshrined in the UNSC resolutions and recognised under international laws.”

Highlighting the need for regional connectivity, PM Khan said it was not a single country but entire regions that made progress and cited the example of the European Union.

He also urged the ECO member states to strengthen their ties, galvanising their joint efforts to mitigate adverse effects of the global warming, including those on the glacial areas of the Asian states.

Earlier, PAECO president and Speaker of the National Assembly of Pakistan Asad Qaiser lauded the revival of the organisation that he said had been dormant for long after its formation in Islamabad.

He appreciated the member countries for adoption of the Islamabad Declaration that strongly supported the people of Kashmir and Palestine, condemning the atrocities and human rights violations. He expressed the hope that the declaration would also strengthen trade cooperation besides regional connectivity.

Speakers of the respective parliaments of the member countries including Turkey, Afghanistan, Azerbaijan, Tajikistan, Iran, Uzbekistan and others addressed the concluding session.

In a joint declaration, PAECO member countries reaffirmed solidarity with the oppressed people of Palestine and Indian occupied Jammu and Kashmir and condemned their gross human rights violations.

They deplored the unilateral economic sanctions and extra-territorial jurisdiction or political pressures as tools applied in violation of the UN Charter and international laws and expressed full support to PAECO member states affected by such illegal tools.

The summit welcomed the offer by Afghanistan to hold the third general conference of PAECO in 2022 in Kabul.

The PAECO encouraged implementation, operationalisation and strengthening of the mechanisms and arrangements within the ECO as building blocks for regional integration as well as to increase intra-regional trade and connectivity among ECO member states. The summit called for early establishment of a general fund for PAECO secretariat in accordance with Article 7(a) of the charter, for making the secretariat fully functional.

It appreciated PAECO secretariat efforts for associating the organisation with Inter-Parliamentary Union as an observer.

The organisation decided that a committee in accordance with Article 4(h) of its charter would examine issues impeding complete operationalisation of PAECO’s inter-parliamentary diplomacy aspect and recommend resolution thereof.

The summit encouraged early establishment of ECO Reinsurance Company to promote growth of national and regional underwriting and retention capacities, minimise the outflow of foreign exchange from the region and support economic development of the member states.

It recognised that trade was vital for sustainable socioeconomic development and to boost economic recovery in the aftermath of Covid-19 and underscored the importance of transit trade, reducing the cost of doing business, and financial infrastructure in expanding intra-regional trade volumes.

It encouraged member states and the secretariat to take steps for implementation of regional infrastructural projects under ECO Transit Trade Framework Agreement (ETTFA) and Operationalisation of ECO corridors.

The declaration said PAECO acknowledged the significance of regional connectivity in transforming landlocked countries into land-linked countries and highlighted the need of simplification of visa processes for business community and tourists.

The summit also underlined the importance of women’s participation in socio-economic development and suggested a web-portal for women entrepreneurs and exchange of delegates, besides holding of exhibitions and training workshops.