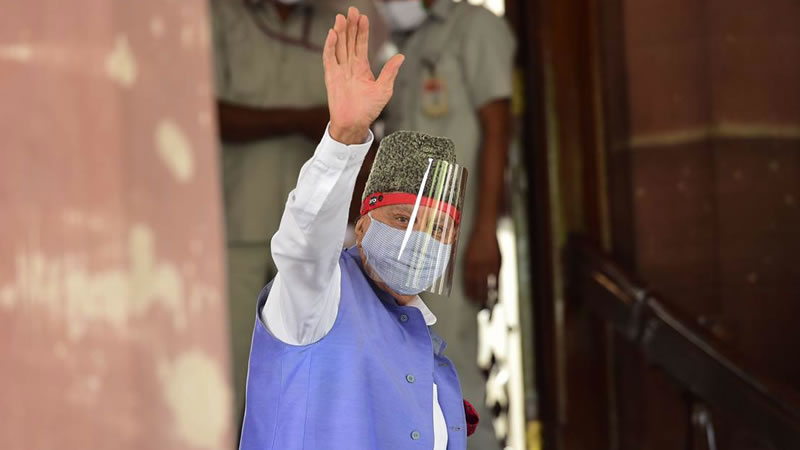 Besieged Kashmiris, including those that once had faith in their destiny with India, would today prefer to be ruled by China than New Delhi, Jammu and Kashmir’s former pro-India chief minister Farooq Abdullah said in a TV interview aired on Wednesday.

“Today Kashm­iris do not feel Indian and do not want to be Indian … They are slaves … They would rather have the Chinese rule them,” Mr Abdullah told veteran TV anchor Karan Thapar, in an interview for The Wire online.

Mr Abdullah said every Kashmiri, including those that had opposed joining Pakistan were looking at the India-China border standoff with interest. China has been incensed by India’s annexation of Jammu and Kashmir, particularly with the changes made in the status of Ladakh.

The Indian government abrogated special provisions in the constitution, including Article 370 that was seen as critical for the state’s conditional pact with India.

“Every Kashmiri believes the new domicile laws are intended to create a Hindu majority … The gap between Kashmiris and the rest of the country is wider than ever before and growing,” Mr Abdullah said.

In a 44-minute interview to Karan Thapar for The Wire, which went up on The Wire’s website between 5 and 6pm (23/9), Farooq Abdullah, the president of the National Conference and a former three time chief minister of Jammu and Kashmir, said it was complete rubbish for the BJP to claim that the people of Kashmir have accepted the August 2019 changes just because there have been no protests.

He said if the soldiers on every street and Section 144 were to be lifted people will come out in their tens of lakhs. Dr Abdullah told The Wire that the new domicile law was intended to flood the Valley with Hindus and create a Hindu majority. He said this has further embittered the Kashmiri people.

Dr Abdullah revealed details of his meeting with the prime minister roughly 72 hours before August 5, 2019 when the constitutional changes in Kashmir were announced. He had met the prime minister seeking assurances about the continuation of Articles 370 and 35A. He asked the prime minister why there were so many troops in the Valley and whether this was because of any perceived military threat.

Consequently, Dr Abdu­llah emerged from that meeting believing the two Articles were not in danger. When asked he agreed that the prime minister had mislead and deceived him.

Dr Abdullah told The Wire that in August 2019, when the constitutional changes were suddenly announced, the National Conference and all other mainstream political parties stood badly discredited in Kashmiri eyes.

Speaking of himself he said he seemed to have fallen between two stools. The Indian government viewed him as a traitor and arrested him. Kashmiris, on the other hand, saw him as a servant of India and said things like ‘serves Abdullah right’ and chided him and taunted him for having said Bharat Mata Ki Jai. This left him deeply shaken and upset. However, after 7-8 months in detention his standing and that of his party and other mainstream parties has been considerably restored in Kashmiri eyes.

People now realise they are not “servants of India”.

Dr Abdullah told The Wire that the National Conference and, in fact, all the other parties that had come together to issue the Gupkar Declaration of August 2019, which was reiterated on Aug 22 this year, were committed to restoring the dignity of Kashmiris. He said this meant reinstating Articles 370 and 35A and restoring statehood. He said he would fight for this — but always peacefully — till his last breath.

Dr Abdullah said that he had faith in the Supreme Court and hoped that they would stop postponing the petition his party has brought and hear it expeditiously.

In the interview he, in fact, appealed to Supreme Court judges to hear the constitutional case quickly.

Dr Abdullah told The Wire that in the greater interest of Kashmir the Mufti and Abdullah families have buried their past differences and come together. He said today Mehbooba Mufti was politically close to both his son Omar and himself.

Asked by The Wire why he had not raised this matter during the present session of parliament, which ends on Wednesday the 23rd, he said he wasn’t given time. He said he had gone to meet the Speaker, along with MPs from Congress, Trinamool, DMK and the Communist Parties, and the Speaker had assured them time for a discussion would be allocated. But that never happened.

Asked if he believed the government had intervened and told the Speaker not to give time, Dr Abdullah said he did not know but agreed the Speaker had not kept his word. He said I am in touch with her frequently every week. In one of the more angry moments of the interview Dr Abdullah asked why has Mehbooba Mufti not been released. “Is she a criminal?” he thundered.

Asked if her incarceration has begun to affect her, Dr Abdullah asked a question in return: “How can it not? She is a human being after all.”

Dr Abdullah said his son Omar Abdullah’s announcement in a recent Indian Express article that he would not contest elections whilst Kashmir remains a union territory is only Omar’s personal decision. It is not the position of the National Conference. However, he added that if Omar does not wish to contest that is his right. Of himself he said he would abide by whatever decision the party takes collectively.