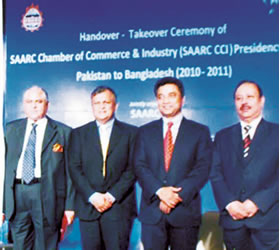 Tariq Sayeed, a former president of the Federation of Pakistan Chambers of Commerce & Industry and Saarc Chamber of Commerce and Industry, welcoming the decision of the government to reduce the size of Cabinet, said that it would lessen the volume of non-development expenditure of the government and would provide quality leadership to the country instead of quantitative representation.Comparing further, he said that while India, with the second largest population of the world, 1.26 billion people, has 26 ministers, USA the third largest nation with a population of 310 million has a cabinet of 14 ministers and UK, which ruled half of the world in colonial system and still has a major role in global affairs, has only 12 ministers in its Cabinet. In Idonesia, which is the fourth most populous country of the world, 20 ministers represent 237 million people in the Cabinet, he said.

Tariq said that smaller but efficient cabinet is in the best interests of the country, particularly in view of the present circumstances the country is faced with. He suggested that the cabinet of the country like Pakistan, which is passing through the worst phase of its history, should be minimised to an adequate size, which will have smaller liabilities and create major impact on domestic and international affairs – Brecorder