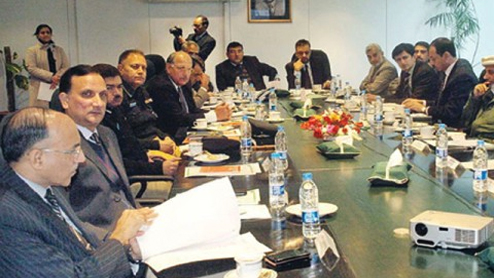 A high level meeting resolved the effects of fraudulent businesses could be devastating, robbing people of their hard earned money. Through our collective and sincere efforts, we need to create a society that has zero tolerance for fraudulent businesses.In order to achieve this objective, we urgently need to have a new strategy and there is the need for developing a national anti-fraud strategy, Tahir Mahmood SECP Commissioner said.The coordination mechanism can be institutionalised by setting up an encompassing anti-fraud body like National Fraud Authority of the UK.

The SECP executive director made a comprehensive presentation on ‘Combating Fraudulent Businesses Together’.He elaborated on various frauds encountered in near past such as forex companies, multi-level marketing, illegal deposit taking, prize schemes etc. He emphasised the need for developing a whistle-blowers’ hotline and rapid proactive approach. Spot it-stop it should be the slogan of this strategy, he said.

The participants of the meeting deliberated on ways of preventing illegal business activities, including Ponzi and pyramid schemes. They unanimously agreed on the need for a new strategy to combat all kinds of business scams. Some participants said in addition to amending old laws, there was a need for a new law to deal with fraudulent businesses.The meeting agreed on sharing of information to identify and prevent business scams. It identified various areas of common interest, including intelligence sharing and training of investigators.

The participants suggested media anchors should also be made part of committee. A participant expressed the National Database and Registration Authority should also be involved in this effort. It was decided the SECP would request various law enforcing and investigating agencies to nominate focal persons for coordination.In 2003 the SECP had received many complaints regarding fraudulent businesses. Consequently it formed a committee comprising of representatives of the SECP, SBP and NAB. Now more stakeholders such as the FIA, FMU and police have been made part of this initiative. – DailyTimes