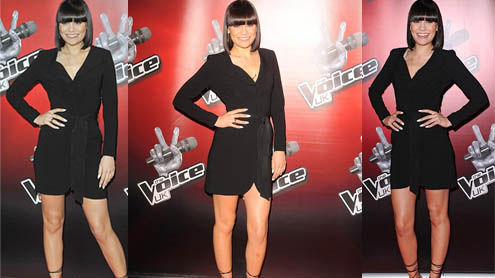 She’s not got long now until she’s planning to shave off her hair for Comic Relief with only a few days left on the countdown.

So Jessie J has managed to fit in one last photo call before shedding her locks for charity on Friday.The Price Tag hitmaker reunited with her fellow The Voice mentors on Monday as she gears up the excitement for the new series.And she certainly seems on form at the moment as she happily showed off her slender physique in a sleek black dress for the promotional call.Jessie, 24, was joined by her colleagues Sir Tom Jones, Will.i.am and Danny O’Donoghue as they set about promoting the second series of the BBC talent show.

Clearly in the mood to impress, she turned up in a black wrap dress with a bow belt detailing, cut to show off her super toned legs.Jessie completed her look with strappy black shoes and manicured nails.And she had her bob perfectly preened ahead of the big shave in four days time, when she will be expected to have shorter hair when The Voice starts airing the live shows in a few weeks time.Jessie was joined by Black Eyed Peas star will.i.am, who seemed in a jovial mood as he posed for photos with his show pals.Wearing his usual flamboyant style, the music producer opted for a white jacket with a black shirt, trousers, trainers and leather studded gloves, and his trademark glasses, of course.

Danny meanwhile went for an all black ensemble and seemed happy to be back on the show and with the same three mentors as last year.Sir Tom Jones completed the line-up, looking dapper in a checked suit jacket and trouser suit.The foursome posed up together as they showed a preview of what to expect – although all will be revealed when the first show airs on 30 March.Hosts Reggie Yates and Holly Willoughby were also present as they also make a return.

Willoughby opted for a studded bodycon dress for the outing next to Reggie, who wore a grey suit with a bright yellow jumper underneath.She’s set to shave her hair on Friday to help raise money for Comic Relief.A promo shot was first released for the new series last week.Standing with Sir Tom Jones, Danny O’Donoghue and Will.i.am, Jessie J showcases her slender figure in all black as she readies a second series of the hit BBC show once again. Resting her arms on Danny’s shoulders, Jessie stands tall in a pair of gladiator heels as she slips into a pair of disco pants.

Completing her look with a sleeveless lace crop top, the Do It Like A Dude singer flaunts her toned abdomen as she wears her jet black hair down in a sleek centre parting.Jessie’s back to basics appearance in the 2013 promo shot is worlds apart from the bold showing she made last year in a leopard print polo neck blouse and gold disco pants as she sported, her then signature, heavy fringe.While Will.i.am rocks a stylish jacket made up of leather sleeves with a pair of oxblood studded high-top boots, both Danny and Sir Tom Jones look dapper in tweed blazer.

Prior to the official release of the still, Jessie posted a picture of the image to Instagram last Friday.Excited for the show return to television sets in the UK, the caption which accompanied the snap read: ‘@bbcthevoiceuk is COMING SOON!!!! Ahhhhhhhh’Spotting the upload, British rapper Chipmunk re-posted the shot and wrote: ‘Looking forward to watching this.’Speaking to LOOK, Jessie’s fellow judge Danny O’Donoghue told viewers what they can expect from the new series.

He said: ‘I can’t give you any names but the level of quality is even better this year and it’s more varied as well. We’ve got buskers, soul singers, piano players. A lot more musicians actually came on this year.’The Script singer also revealed that the format of the show has been tweaked a little with new rules being introduced and a whole new round called Killer Song.Danny continued: ‘I get twelve contestants, then they get chopped down to six. But then the other judges are allowed to steal any of those acts away from me if they‘re like “What are you kicking them out for?”.’There are knockout stages, judges stealing from other judges, and toys being thrown out of the pram if they haven’t got an artist.’ – DailyTimes