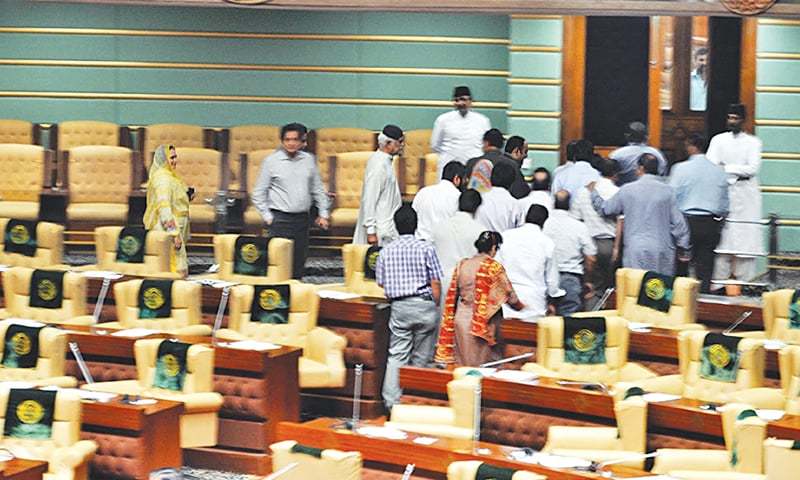 Leader of the Opposition Khwaja Izharul Hassan and a number of opposition members tore up copies of the finance bill and threw them in the air before staging a walkout while raising slogans the budget was anti-people and thus unacceptable.

The bill had widened sales tax net on services by levying tax on 18 services including technical, scientific and engineering consultants, tour operators, manpower recruiting agents, share transfer agents, property dealers, fashion designers, interior decorators, rent-a-car, automobile dealers, laundries and dry cleaners. After the bill’s adoption, Chief Minister Syed Qaim Ali Shah tried to dispel the impression in his speech that it was against people and said it would not be a burden on the common man. “We will never take any step which overburdens the poor,” he said. He said the PPP was the only party that had provided jobs to 275,000 people while others failed to deliver despite having been in power for 10 to1 5 years. He said the finance minister had rightly pointed out that as compared to Punjab and the federal government which levied 16 per cent GST, the Sindh government had reduced it to 14 per cent.

Besides, there was no tax on farmers and workers, he said. “Let them not give any credit to us for restoring law and order and ensuring protection to life and property in Karachi and the entire province,” he said, apparently referring to opposition. The chief minister praised Speaker Agha Siraj Durrani for running the house in a democratic manner and in keeping with parliamentary practices. During the entire budget discussion, he said, he provided full opportunity to all members to express their feelings and did not use ‘guillotine’ to deal with 572 cut motions against 50 demands for grants of over Rs33.51 billion supplementary expenditure 2014-15 and 59 demands for grants of Rs719.31 billion for the financial year 2015-16.

Barring a few cut motions, all were rejected. Finance Minister Syed Murad Ali Shah said that the bill aimed at rationalising taxes and broadening tax net by bringing in the services that had not been taxed up till now. He said the levy of property tax in urban areas was a misnomer as property tax was levied all over the province with different valuation table. MQM parliamentary party leader Syed Sardar Ahmad opposed the bill and said that instead of overburdening the common man, whose condition had become wretched because of price hike, tax should be imposed on agricultural income. Leader of Opposition Khwaja Izharul Hasan said: “We have already rejected the budget because it is against common man and seeks to make the rich richer and the poor poorer.”

PML-F parliamentary party leader Nand Kumar said that people who were committing suicide because of abject poverty and hunger would not be able to bear any more taxes and demanded the bill should be withdrawn. MQM’s Muhammad Hussain said that 90 per cent collection of property tax was made in Karachi. After rejection of cut motions the schedules of authorised supplementary budget statement for the year 2014-15 and authorised expenditure for 2015-16 were laid before the assembly and the speaker read out the governor’s order to prorogue the session sine die after completion of business for the day.