Australia hails Pearson as ‘among the greats 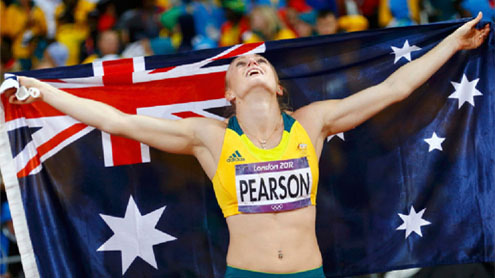 Sally Pearson’s victory in the 100m hurdles elevated her among “Australia’s Olympic greats”, media said on Wednesday, as the country finally found something to cheer about.

With Australia on course for one of its worst Games in years, recriminations and soul-searching over the poor performance in London have begun in earnest, but gold by Pearson and cycle queen Anna Meares restored some pride.“Draped in glory,” said the Australian Broadcasting Corporation on its website, praising Pearson for giving the country “a welcome boost in the medals table”.Pearson held her nerve to win with a powerful dip finish in 12.35sec, an Olympic record, ahead of Beijing gold medallist Dawn Harper of the United States.

It gave Australia its first track-and-field gold in London.“Gold medallist Sally Pearson now sits among Australia’s Olympic greats,” declared the Sydney Daily Telegraph.“Not for what she did, but for what she overcame. She was expected to win the gold medal,” it said in a comment piece.“She was expected to win by her competitors, those who honestly believed they didn’t have the gold medal in them. Most of all, she expected to win herself.”Australian media also revelled in Meares storming to victory in the women’s sprint final over arch-rival and British home favourite Victoria Pendleton.

“Meares topples Queen Victoria,” said The Australian broadsheet, adding that it was “revenge for Beijing”, referring to the 2008 Olympics.The Sydney Morning Herald said: “There comes a time when enough is enough,” alluding to Pendleton’s countless wins over Meares at big events.“With her body, and just as much with her mind, Anna Meares dethroned Britain’s queen of cycling in front of the world at London’s Olympic velodrome,” it said.At the end of day 11, Australia has four golds, but is still massively behind China (34), the United States (30) and hosts Britain (22).The poor medal haul saw Australia’s most senior member of the International Olympic Committee, Kevan Gosper, on Monday blame the country’s performance on cuts in government funding.

Early Man was not alone: study