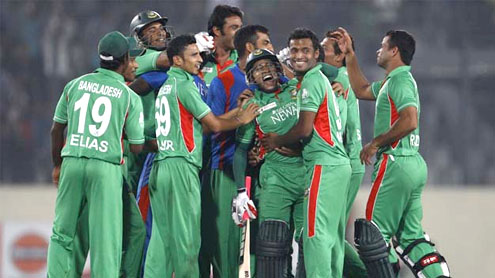 DHAKA: History beckons Bangladesh as they aim to rise above the minnows tag and notch up their biggest title since arriving on the international scene when they take on an unpredictable Pakistan in the final of the Asia Cup here on Thursday.

With former champions India and Sri Lanka shockingly thrown out of the competition, it is the most surprising summit line-up for the event which is struggling for relevance in a crowded international calendar.Defending champions India paid the price for a stunning loss to Bangladesh in the league stage while four-time winners Sri Lanka failed to register a single triumph this time.

However, the determined side proved the critics wrong by beating an already demoralized Sri Lanka as well, a result that knocked India out of the final.But Pakistan would look to play the party poopers. Misbah-ul-Haq`s men have not won the title since 2000 edition, which was interestingly held in Bangladesh.Pakistan were given a mighty scare in the league encounter that they played against the spirited hosts but would still be overwhelming favorites to win the title for only the second time.

They certainly have the arsenal to complete the job. Their batting looks solid with in form openers Mohammed Hafeez and Nasir Jamshed providing fine starts in the league stage.Pakistan certainly start favorites when the two captains walk out for toss tomorrow but given the high Bangladesh is on right now, it could well be the night of the underdog. – PT