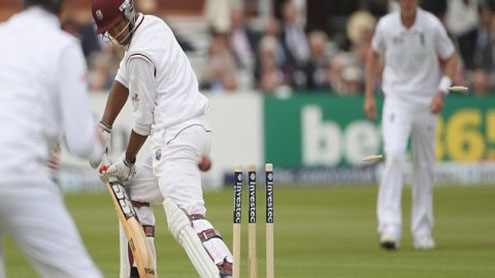 LONDON: West Indies, after losing the toss, were 243 for nine against England at stumps on the first day of the first Test at Lord’s here on Thursday.

Shivnarine Chanderpaul was 87 not out after Stuart Broad ended play for the day by having Fidel Edwards caught behind for two to finish Thursday with figures of six for 72.This is the first of a three-Test series.Earlier, at lunch, Adrian Barath’s unbeaten 41 helped the West Indies to 83 for two at lunch on the first day of the first Test against England at Lord’s here on Thursday.West Indies were suffering an all too familiar top-order struggle at 32 for two after England strike bowler James Anderson had removed Kieran Powell and Kirk Edwards.

But opener Barath refused to be cowed and with Darren Bravo (27 not out) offering solid support in an unbroken stand of 51, the West Indies — who came into this match having won just two of their previous 30 Tests — got through the session without losing any more wickets against the world’s number one-ranked side.England captain Andrew Strauss won the toss and elected to field, doubtless hoping his seamers would exploit the overcast conditions.But with Barath unfurling several cover-driven boundaries, England did not have things all their own way.

Powell, who made a cenntury against the second-string England Lions last week, fell for five when Anderson, after moving several deliveries away from the left-hander, expertly swung one back in.Powell was late with his intended defensive shot and was bowled off stump to leave West Indies 13 for one in the ninth over.Anderson was in the wickets again when Edwards, aiming across the line of a full-length delivery, was lbw for one.At that stage, Anderson had taken two wickets for nine runs in 19 balls.But Barath struck his sixth four in just 25 runs when Stuart Broad felt the force of his cover-drive, while off-spinner Graeme Swann was denied a customary early wicket. – PT

How a big meal hits our waistline in just 3 hrs!