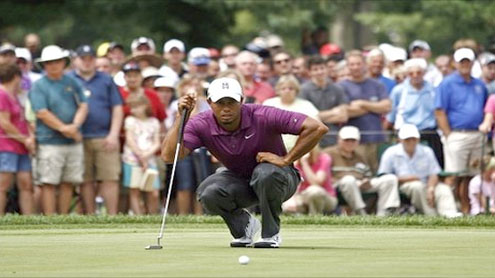 Tiger Woods returned from injury with an impressive two-under-par opening round of 68 in the first round of the WGC Invitational in Akron, Ohio.In his first competitive appearance for 12 weeks, Woods parred the first nine holes and dropped only one stroke.

Playing partner and Open champion Darren Clarke struggled to a 77, but Lee Westwood shot 67 and world number one Luke Donald and Rory McIlroy 68’s.Australian Adam Scott carded a superb 62, for a one-shot lead over Jason Day.Scott, with Woods’ former caddie Steve Williams on his bag, was in sublime touch with his unorthodox elongated putter, with three successive birdies on the back nine and no dropped strokes.

In tranquil, sunny conditions at the Firestone Country Club, Woods, who has won seven times at the course, hit his first two tee shots into fairway bunkers but displayed impressive powers of resolve in a level-par outward nine of 35.His approach to the third went through the green after some mud affected the flight of the ball and his chip from thick rough went 15-feet past.But the former world number one, back with the favoured steel Scotty Cameron putter he used to win all but the first of his 14 major titles, holed impressively for par.

A majestic iron shot to six feet at the par-three fourth set up a birdie chance but it stayed up, as did an eight-and-a-half foot opportunity after a fine six-iron at the next.However, Woods sank a 20-footer for par at the ninth, calmly rolled in his first birdie of the day from five feet at the next and another fine approach to seven feet set up another at the 11th.

His only dropped shot of the day came at the 467-yard par-four 14th when a nine-iron second shot from 161 yards went over the green and found an awkward spot in the bunker.A third birdie followed at the par-five 16th despite an errant drive, followed by a dramatic cut escape from under the trees, an indifferent pitch and then a magical 25-foot putt from the edge of the green. “The hardest part was controlling the distances, I was hitting it so flush,” the 35-year-old said. “I’ve got so much more speed and compression through impact. The ball’s taking off and I was hitting numbers I’ve never hit before. It was fun.”Clarke holed his second shot from 184 yards for an eagle at the eighth but came home in 41 shots, taking a double bogey at the 16th after visiting the lake in front of the green.

Donald, who missed the cut at The Open last month, had no such problems, starting his round at the 10th with a birdie and collecting another at the second.”It was an easy two under,” he said. “I hit the ball very well tee to green and could have gone lower if I’d got the putter working a little better.”McIlroy, who revealed on the eve of the event that he is likely to rejoin the PGA Tour next year, began his round from the 10th and bogeyed two of his first four holes, but knocked in a 12-foot birdie putt on the 17th.A 230-yard second shot to within six feet of the flag set up an eagle on the 526-yard second and he followed that with a birdie before parring his way in.

“It was a decent opening round. I’ve still got a little bit to work on, but 68 is not a bad start,” said the 22-year-old Northern Irishman after his first round in America since winning the US Open in June.His compatriot Graeme McDowell, also began at the 10th, had four birdies in his first nine holes before wayward drives cost him four shots in three holes and he finished with a one-over-par 71.

McDowell was partnering Westwood, who turned in level par before collecting birdies at the first, second, fifth and sixth.The world number two has started working with Dave Stockton on his putting and Bob Rotella on his mental approach to the game and commented: “I’m not spending so much time over the ball.”A 67 is never anything to complain about around this golf course, even when there’s not much wind and it’s playing soft. I was pleased with the way I played.” – BBC