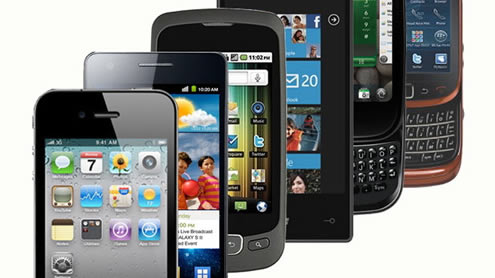 It could mean the end of the daily hunt for power cables. Korean researchers have unveiled an experimental wireless recharging system that could top up the mobile of everyone in the office wirelessly. The system can transmit power up to 5 metres, and charge up to 40 phones at a time – and is even powerful enough to power a TV. Called the ‘Dipole Coil Resonant System’, it is believed to be the longest range wireless power system developed so far, with a range of 5m. ‘The way electronic devices receive their power has changed tremendously over the past few decades, from wired to non-wired,’ the researchers say. ‘With DCRS a large LED TV as well as three 40 W-fans can be powered from a 5-meter distance.’ The distance is a record for wireless technology. Current phone systems, for example, require the user to place their phone on a charging ‘pad. with the new system, they would never need to remove it from their bag or pocket.

‘Our technology proved the possibility of a new remote power delivery mechanism that has never been tried at such a long distance. ‘Although the long-range wireless power transfer is still in an early stage of commercialization and quite costly to implement, we believe that this is the right direction for electric power to be supplied in the future.

‘Just like we see Wi-Fi zones everywhere today, we will eventually have many Wi-Power zones at such places as restaurants and streets that provide electric power wirelessly to electronic devices. ‘We will use all the devices anywhere without tangled wires attached and anytime without worrying about charging their batteries.’ – dailymail