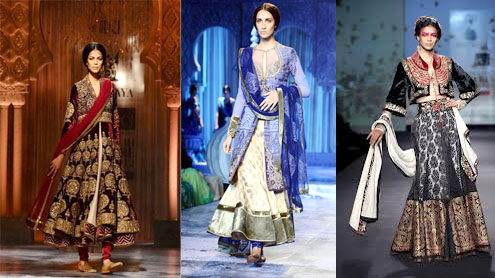 Delhiites being Delhiites, the star showstopper still matters most, even though most designers cry hoarse saying their clothes are the real stars. Everyone was talking about it, and Sunil Sethi, who usually starts saying he has no passes only towards the start of a show, began doing so sometime in the afternoon.

But things proceeded in a leisurely fashion, since there were no off-site venues to be rushed to. “Thank God for that. Frankly, I had no energy left,” one designer told us. And many others just caught up with each other and gossiped. We did catch tidbits of ‘Kya iska collection pret tha?’ or ‘I don’t know why that person is showing in couture week’ sort of conversations, all of which culminated in more tamasha at the late night party. But that’s another story…

Manish Arora
Manish’s show had all the happy madness we’re used to – the sets had the trademark whistles, the fluorescent glow, the crazy-to-get-in crowd, and a profusion of polka dots. The polka dots reminded one of the Japanese artist Yayoi Kusama, who’s more than once admitted to having an obsession for polka dots. The ramp wore a Diwali look, and the clothes were bright and, of course, neony. Manish’s designs were his favourites from his Paris show, never before shown in India, coupled with a retrospective of his earlier works, since he was showing after a gap of three years. As if we needed reminding, Manish! Perhaps the outfits were not strictly couture, but as Manish said, “Where are the real couturiers today?

I guess there are 8-9 of them in all. Real couture means doing everything by hand, and not using machines. Not even using zippers.” There were a couple of fur outfits – not faux, real (“they’re real, they’re legal”), and one that looked like a jigsaw puzzle had been put together, another with lips motifs, complete with a dangling cigarette. Typical Manish psychedelic colours, the cigarette pants, meticulous 3D motifs were all there. And yes, the audience went crazy pointing out those designs already made famous by Lady Gaga, Katy Perry, and Nicki Minaj.

Manish’s Japanese inspiration?
We all know Manish Arora loves all things avant-garde. After all, we’ve often hailed him as our Andy Warhol. So it was hardly surprising to see Manish take inspiration from Yayoi Kusama’s work, Fireflies On The Water (above), which is part of an ongoing exhibition at New York’s Whitney Museum of American Art. This work, one from Whitney’s own collection, shows a magical, disoriented world hung in a fully mirrored room with a pool at its centre.

The viewers of the installation feel as if they are immersed in a swarm of fireflies. This was the exact feeling Manish tried to evoke in the show (left), with the lit up columns on the ramp, and neon polka stickies everywhere else – on the walls, curtains, ushers, even the guests. So, how long before you go totally dotty and bring out a polka dot collection, Manish?

Anju Modi
Anju showed her design maturity with a resplendent collection titled Devi. Her inspiration was Bengali literature, and the powerful women characters in its many works. “There’s Charulata, Paro and Parineeta, to name a few. I think those women were a combination of power and delicacy, grace and steely determination. These characteristics have been my inspiration,” said Anju.

Against a backdrop of a moving riverscape, the ghats, and old movies on the above characters, models showcased Anju’s layered, rich and elegant ensembles that showed a clear revamping of design. A hint of red became a leitmotif in the clothes that wove in and out of beiges, black and gold, in woven fabrics like Benarasi silk and muslin. Madhuri Dixit Nene was the showstopper, and she looked beautiful – more like Aishwarya Rai Bachchan did in Devdas.

Feather light tone
We noticed a quirky-looking character mingling with the other guests at Manish’s show – he wore an odd hair band on his very bald head. He turned out to be pharmacist and part-time DJ Apurve Mehra, who didn’t seem to feel out of place with his feathered hairband as bewildered guests stared at his head, some in appreciation and some in simple shock! – TOI