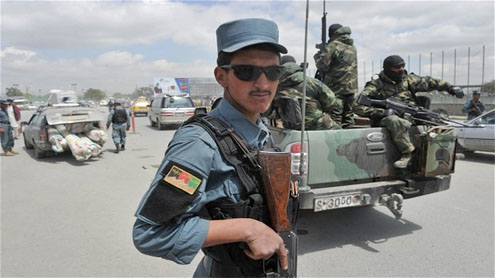 Five insurgents planning a suicide attack in Kabul have been killed in a predawn gun battle in the capital, an Afghan security official said on Thursday.

At least two others were still holed up in a house in the east of the city and the fighting was continuing, National Directorate of Security spokesman Lutfullah Mahsal told AFP.A spokesman for NATO’S military in Afghanistan confirmed that “an incident of that nature is currently happening in Kabul”, without providing further details.”A group of insurgents armed with suicide vests, rockets and machineguns planned to seize a tall building in Kabul’s (central) Shar-i-Naw area,” Mahsal said.

Acting on intelligence, security forces raided a house in the eastern Pul-e-Charkhi neighbourhood and a gunfight erupted, he said.”There has been an ongoing gunfight since the first hours of this morning. So far, five of the men are dead and two or possibly more are still fighting.”  Mahsal said a minivan full of explosives had also been found in the house.On April 15, in the biggest coordinated attack on the capital in 10 years of war, three squads of Taliban suicide attackers took up positions in high buildings under construction and fired on government offices, embassies and military bases.

Seventeen hours of fighting left 51 dead, including 36 attackers.The latest gunfight in the capital comes after Nato reported an escalation in insurgent attacks in recent months and amid growing unrest in areas neighbouring Kabul.NATO’S International Security Assistance Force (ISAF) said last week that attacks in the second quarter of this year were 11 per cent higher than in the same period last year.The month of June alone saw the highest number of attacks in nearly two years, with more than 100 assaults a day across the country, including firefights and roadside bombings, the US-led coalition said.

On Wednesday, insurgents executed seven Afghans in two areas near Kabul for working with Westerners, Afghan officials said, while four Nato troops and an interpreter were killed in roadside bomb attacks.The hardline Taliban Islamists warned at the start of their annual summer offensive this year that they would target Afghans working for foreign organisations. arge numbers of local people work for Western civilian and military projects in Afghanistan,

where Nato has 130,000 troops helping the government of President Hamid Karzai fight the insurgents.The Taliban were toppled from power in a US-led invasion in 2001 for harbouring al Qaeda leader Osama bin Laden after the 9/11 attacks on New York and Washington.But the international troops are scheduled to pull out of Afghanistan by the end of 2014, handing responsibility for security to government forces.  – Telegraph