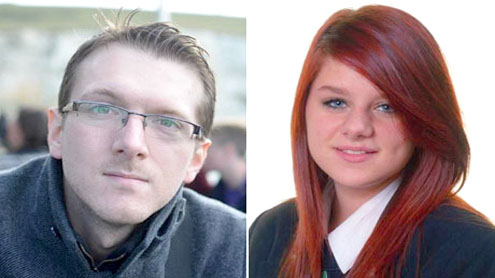 A 15-year-old schoolgirl and her married teacher, who are believed to be together in France, had booked a return ferry ticket but did not use it, police say.

Megan Stammers, from Eastbourne, and Jeremy Forrest, 30, left on Thursday night from Dover for Calais, and had booked to return by the same route on Sunday. Police have disclosed that a message was sent to a friend of the runaway teenager saying she had arrived in France, and though it was not from Megan’s phone, it was believed the message was from her.

As Megan’s parents made appeals for her to get in touch, Chief Inspector Jason Tingley, leading the investigation, made a direct appeal to Forrest. “My message to Mr Forrest is this may not have gone as you expected it would. Right now, our priority is to know that Megan is safe, and I would ask you to do the right thing and make contact with us.”Appealing to Megan, he said: “We believe that you left of your own accord with Jeremy. But we need to hear that you’re OK. You are not, and I stress, you are not in trouble.”

Megan, a pupil at Bishop Bell CofE school where Forrest, who married last year, teaches maths, was reported missing on Friday. She had told her mother she was staying with a friend on Thursday night. It also emerged that she had been receiving after-school extra-curricular tuition in maths.Her mother, Danielle Wilson, implored: “Sweetheart, I don’t care what you’ve done or why. I just want you home.”

Her stepfather, Martin Stammers, also a teacher, who is estranged from her mother, said the last contact he and Megan had was an agreement by text to meet for lunch last Saturday. “We had a date on Saturday and we didn’t make it. Babes, the offer’s still there, sweetheart,” he said. “I just want you to come home safe and well.” It was “so out of character for her”, he added.Police believe the pair are travelling in Forrest’s black Ford Fiesta, registration GJ08 RJO, and may still be in France. They are working with French authorities, the UK Border Agency and the British embassy in France.

Tingley said: “Our inquiries have shown that they left the UK after 9.30pm on Thursday 20 September, after boarding a ferry in Jeremy’s black Ford Fiesta. They were expected to return yesterday [Sunday], during the late evening. The scheduled ferry and the passenger list were checked but they were not on either.”

Forrest, from Ringmer, near Lewes, a musician who plays with a band and uses the stage name Jeremy Ayre, is a regular blogger and tweeter. He had apparently written on his blog, under his stage name, about a “moral dilemma” in a posting four months ago headed: “You hit me just like heroin …” Posted online on 19 May, it states: “The last two weeks have been pretty intense, in both a good and a bad way!!! I’ll touch on the bad, although it will have to be a bit vague to be public-ally digestible, but have lots of positive music related s*** to shoot … About a week ago I had a bit of a moral dilemma to deal with, both internally and externally. And the overriding question it left me with was this: How do we, and how should we, define what is right or wrong, acceptable or unacceptable???

“I came to a few different conclusions, mainly that actually we get a lot of things wrong, but at the end of the day I was satisfied that if you can look at yourself in the mirror and know that, under all the front, that you are a good person, that should have faith in your own judgment. That’s some philosophical gold for you there!!!”Megan was described by her mother as “a typical girl”. She said her daughter was intelligent but could also be “very childlike”. She had been like an “excitable puppy, jumping around” and telling her mother she loved her before she left.

Appeals for help in tracing her continued to be posted on Twitter and Facebook, including by her sister Brooke who tweeted: “Keeping hope that we’ll have good news soon. Need our meg home safe and sound #keepfaith #findmeganstammers.”A statement on the website of Bishop Bell school said: “We are extremely concerned about a missing pupil and, if anyone at all has any information, we would urge them to contact the police.”

Officials at East Sussex county council said they were investigating the background of the case “as a matter of urgency”. “Obviously this is a serious situation and one which we and the school are extremely concerned about. As a matter of urgency we are investigating exactly what has happened and will decide what action needs to be taken,” they said.Anyone with information is asked to call Sussex police on 101.