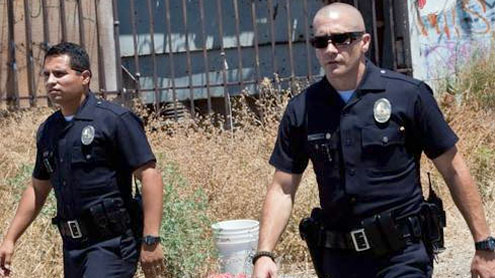 The US box-office slide continues. Studio executives could not have been happy when they scoured the numbers over their double espressos yesterday, but there is good and bad associated with all this.

The bad news is that box office was down around 25-28% compared to last year, depending on whether you look at only the top 12 grosses or every movie in release. The good news is that well-made independent films (albeit movies that audiences may not always embrace) are breaking into the top 10 and mixing it up in a stomping ground traditionally dominated by the big six studios and the likes of Lionsgate, Summit (now owned by Lionsgate) and the Weinstein Company.Heading into Sunday evening, two films were neck-and-neck (on around $13m) for the coveted No 1 spot – and both hail from outside the studio system.

One was End of Watch, a fast-paced tale of gung-ho cops on patrol in south central Los Angeles, financed and produced by Exclusive Media Group and Emmett/Furla Films. The US distribution rights were sold to Open Road, a young distributor formed by the cinema chains AMC and Regal.

The other contender was House at the End of the Street, starring Jennifer Lawrence, star of The Hunger Games. FilmNation, an international sales agency that has been moving into production, made it with a smaller partner called A Bigger Boat, run by Peter Block, who oversaw production on the Saw franchise back in his Lionsgate days. Block’s former colleague Tom Ortenberg worked there, too, and also served time at the Weinstein Company. Ortenberg now runs Open Road.

This group of bright, highly experienced executives who are prepared to exploit opportunities in the market epitomises the new distribution landscape. As the studios contract their output to focus on 12-15 tentpole releases a year, new operators are rushing in to fill the space. Well-capitalised companies such as Relativity, Open Road and FilmDistrict, along with FilmNation and IM Global – neither of the last two is a distributor but both provide content – are able to provide studio-level movies with increasingly broad appeal.

End of Watch and House didn’t deliver huge opening weekend numbers, but the companies behind them have the clout to fund marketing campaigns and make a splash of sorts. After all, no studio movie ranked higher than them this weekend, and you can be sure both will enjoy a healthy future in the ancillary markets of DVD, VoD and digital.

IM Global and its Indian parent company, Reliance, financed and produced Dredd, the generally well-reviewed Judge Dredd remake starring Karl Urban. This one previewed at Comic-Con last July and premiered in Toronto, but fell short of expectations in the harsh proving grounds of theatrical release. It debuted in sixth place on $6.3m. Decent word of mouth may help Dredd stick around and it, too, will prosper on ancillary platforms.

Clint Eastwood rarely appears in a movie these days unless he’s directing – you have to go back to 1993 and Wolfgang Petersen’s In the Line of Fire – but the old warhorse took the plunge on Warner Bros’ gentle father-daughter drama Trouble With the Curve, from Robert Lorenz. It opened in third place on $12.7m. Earlier in the year, Warner Bros harboured hopes the movie might merit an awards campaign, but the mediocre response from critics and audiences seems to have put the kibosh on that.

On the other hand, an illustrious awards career surely awaits Paul Thomas Anderson’s latest work, The Master. The movie may have the commercial chops to match its artistic pedigree and climbed 12 places to No 7 this weekend for a $5m gross. The running total is $6.1m after two weekends. The distributor is Harvey Weinstein. The 85th Academy Awards takes place on 24 February 2013. I’m just saying. – Guardian