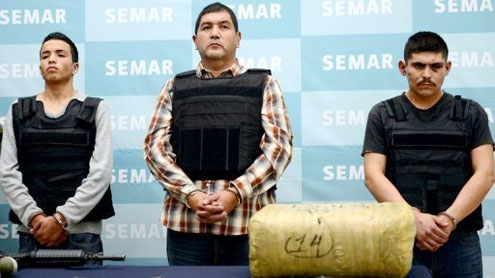 Mexican security forces say they have arrested one of the country’s most wanted drugs traffickers.

Ivan Velazquez Caballero, known both as El Taliban and as Z-50, was a commander of the notorious Zetas cartel.Police paraded their prisoner – who was arrested by marines in the city of San Luis Potosi – on national TV.The arrest comes days after it was reported that Velazquez had split from the Zetas and joined the rival Gulf Cartel.He is believed to have controlled some of the most important drug routes into the United States and ruled them with cold brutality.He had a reward of 30m pesos ($2.3m, £1.5m) on his head.

Masked Mexican marines displayed the handcuffed suspect alongside two alleged accomplices and an array of weapons and other contraband – including drugs – seized during the arrest.Police say Velazquez, 42, was the Zetas’ main leader in the states of Zacatecas, Nuevo Leon and San Luis Potosi.He is said to have been at war with another leader of the gang, Miguel Angel Trevino, known as Z-40, a former member of the Gulf Cartel.
In-fighting

Police believe a recent surge in mass killings was due to a split within the Zetas.In August, a man survived a mass shooting near the city of San Luis Potosi by playing dead.
He let the attackers – from his own cartel, the Zetas – pile him into a van alongside the bodies 14 others who had been shot dead.As a result of the survivor’s account, it became clear that the Zetas had split into two factions.

One faction is said to be led by one of the founders of Los Zetas, Heriberto Lazcano alias “El Lazca” or “Z-3”; the other is led by Miguel Angel Trevino.More recently, notices have been displayed saying Ivan Velazquez had joined forces with the Gulf Cartel.The Zetas were enforcers for the Gulf Cartel in the 1990s.By 2005, they had broken away and started to run criminal enterprises themselves, and now control whole swathes of north-eastern Mexico.On Monday, 35 police officers were arrested in operations in the states of San Luis Potosi and Veracruz, accused of having links to the Zetas. – BBC