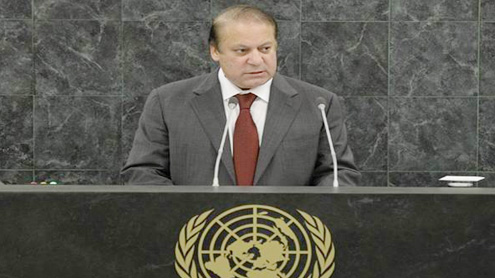 UNITED NATIONS: Prime Minister Muhammad Nawaz Sharif Friday called for an end to drone strikes on Pakistani soil in an address to the UN General Assembly and underscored Islamabad’s commitment to regional peace as well as the need for realization of the right of the people of Jammu and Kashmir to self-determination.

In his wide-ranging address, which received a warm round of applause, the prime minister said he looks forward to meeting his Indian counterpart this weekend to make a “new beginning” towards peace in South Asia.Pakistan,he said,has suffered grievously in the face of terrorism and is firmly opposed to all forms and manifestations of terror and would also explore dialogue to end militancy.But,he underlined that the dialogue should not be seen as a tool of appeasement.

He also told the 193-member forum that Pakistan is a responsible nuclear powerand qualifies for access to civilian nuclear technology.Nawaz Sharif also reaffirmed Pakistan’ss commitment to a stable Afghanistan.“To save the world from the scourge of war, we have to continue to strive for a fair and just international order,based on rule of law.Festering disputes must be resolved. In this regard,the United Nations has to play a critical role,” he stated.

“The United Nations must continue to remain attentive to the issue of Jammuand Kashmir and the full realization of the right to self-determination of its people,” he emphasized, reminding the world that   suffering of the people cannot be brushed under the carpet, because of power politics.”In this respect,he reiterated his call on the international community to givean opportunity to the Kashmir is to decide their future peacefully, in accordance with the United Nations Security Council resolutions.

The issue of Jammu and Kashmir was presented to the Security Council in January 1948; and yet the issue remains unresolved after nearly seven decades, he pointed out.On Islamabad’s policy toward the region,he said “I have an aspiration for regional peace and stability.I have shared this vision with leaders in our neighborhood.Shortly after assuming office,I received a message of goodwill from the Prime Minister of India,Dr.Manmohan Singh.I extended an invitation to him to engage with us to address all outstanding issues between our two countries. Prime Minister Singh’s response was positive.”

He noted that Pakistan and India have “wasted massive resources in an arms race.We could have used those resources for the economic well-being of our people We still have that opportunity. Pakistan and India can prosper together; and the entire region would benefit from our cooperation.”“We stand ready to re-engage with India in a substantive and purposeful dialogue.”“Prime Minister Sharif said he is looking forward to meeting Prime Minister Manmohan Singh here in New York “to make a new beginning.”

“We have a solid basis to do that. We can build on the Lahore Accord signed in1999, which contained a road map for the resolution of our differences through peaceful negotiations.I am committed to working for a peaceful and economically prosperous region. This is what our people want and this is what I have long aspired for.”Regarding his country’s relations with Afghanistan,the prime minister told world leaders that he welcomed President Karzai in Islamabad last month.  “We reaffirmed our shared goal of a peaceful, stable and united Afghanistan.”

“The people of Afghanistan are and should remain masters of their own destiny.We support an inclusive, Afghan-led and Afghan-owned peace process, leading tonational reconciliation.”“I reassured President Karzai that we do not wish to interfere in Afghanistan’s internal affairs; nor do we have any favorites in that country.In fact,we have an earnest hope that the Afghans themselves will unite for peace, prosperity and development of their great country.”Pakistan encourages United Nations’s efforts for the stabilization of Afghanistan,he said.

“We will work together with Afghanistan for regional and economic cooperation that would establish and reinforce regional trade, energy and communications corridors.”“A manifestation of our solidarity with the Afghan people has been our willingness to host millions of Afghan refugees in Pakistan for many decades.International support for their repatriation as well as reintegration in Afghanistan is indispensable.”Focusing on the issue of terrorism, Prime Minister Sharif said in the past twelve years,Pakistan has given huge sacrifices, in blood and resources. “We have lost 40,000 precious lives of men,women and children,which include 8,000 defense and security personnel.There have been colossal damages to social and physical infrastructure as well.Our economy has been denied the opportunity to grow fully.”

“This must change now. I have tried to forge national consensus on a cohesive policy to eliminate terrorism from our soil.For that purpose, I convened an all Parties Conference, which spoke unanimously against terrorism.”“We are resolved to oppose the forces of terrorism, by all means at our disposal.At the same time,we have offered dialogue to end violence, wean young extremists off extremism,and integrate all segments of our society into the national mainstream.”“Winning hearts and minds, particularly of the youth, is as important as using guns to deter terrorism.But dialogue should not be seen as a sign of weakness or a tool of appeasement.”

“The war against terrorism must be waged within the framework of international law.The use of armed drones in the border areas of Pakistan is a continued violation of our territorial integrity.It results in casualties of innocent civilians and is detrimental to our resolve and efforts to eliminate extremism and terrorism from Pakistan.I have urged the United States to cease these strikes, so that we could avert further casualties and suffering.”Terrorism, he said, knows no borders.It has no religion or creed,which is why maligning a whole people or a religion on this account, is unfair and unwise.

Islam is a religion of peace, compassion and brotherhood, the prime minister said.“And yet most insidious form of contemporary racism in the name of religion is on the rise. Peaceful Muslim communities are profiled and subjected to discriminatory practices.Their faith, culture, holy personalities and scriptures are under attack.”“Stereotyping of Muslims as extremists and terrorists must stop.”We must all use the influence and reach of the United Nations to avert a clash of civilizations and promote harmony among followers of diverse religions, all around the world.”

Terrorism negates Islam’ss humanistic outlook and noble values. Those who perpetrate terrorism are enemies of Muslims and Islam itself.Referring to the recent attack on a church in Peshawar, the prime minister the Pakistanis are deeply saddened by the recent terrorist attack on the members of a minority community.“This heinous attack has united the entire Pakistani nation in support of our brothers and sisters of all faith in Pakistan.We share their grief and declared three days of mourning.This attack has been carried out by the same elements who have attacked our mosques,our shrines,innocent citizens,and members of our security forces.However,this attack has further strengthened my Government’s resolve to deal with terrorism and extremism in a resolute and comprehensive manner,as I had reiterated in my very first speech at the National Assembly of Pakistan.”

Turning to the nuclear issue, he said as a responsible nuclear weapon state, “we will continue to pursue the goals of disarmament and non-proliferation and adhere to the policy of Credible Minimum Deterrence, without entering into an arms race.”“Safe, secure and peaceful use of nuclear energy, without discrimination, is essential for economic development. Pakistan qualifies for full access to civil nuclear technology for peaceful purposes, to meet its growing energy needs, for continued economic growth.”

By the same token, he said, as a mainstream partner in the global non-proliferation regime, Pakistan has impeccable credentials to join the multilateral export control regime, including the Nuclear Suppliers Group.Pakistan will continue to participate constructively in the Nuclear Security Summit (NSS) process, which is a laudable initiative.The prime minister also reiterated Pakistan’s support for the Palestinian people’ss right to self-determination and statehood and expressed support for a recent international agreement aimed at placing Syrian chemical weapons under international control.He called for a resolution of the lingering Syrian conflict. – APP