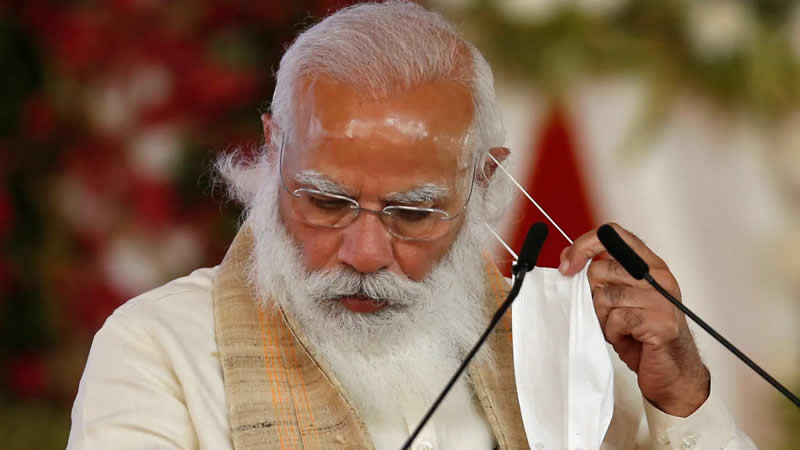 India’s medical fraternity has had it with Narendra Modi.

Dr Navjot Dahiya, vice-president of the Indian Medical Association, a voluntary organisation of medical professionals, has called the Indian prime minister a “super-spreader” of the Covid-19 pandemic. He told The Tribune newspaper that the blame for this devastating second wave lies squarely at the feet of Modi’s government.

“While the medical fraternity is trying hard to make people understand mandatory Covid norms, prime minister Modi did not hesitate to address big political rallies tossing all Covid norms in the air,” Dahiya told The Tribune newspaper on April 26.

Dahiya’s strong statement comes in the backdrop of massive election rallies that were headlined by Modi and his aide, home minister Amit Shah, in West Bengal and other poll-bound parts of India. Not only did the prime minister pull crowds at these mass public events, but he also celebrated them as successes on his Twitter feed.

Added to this was the public spectacle at the Kumbh Mela, the Hindu gathering which saw crowds of up to 3 million come together on the banks of river Ganga in Haridwar. All of these events took place even as India began crossing all previous single-day surge records and swiftly went from registering 100,000 new Covid-19 cases a day to over 350,000 daily cases in under a month.

This sudden and apocalyptic spike has wreaked havoc on India’s already weak healthcare system. Medical oxygen has been in short supply, and hapless state governments and private hospitals have had to go to court—and appeal on Twitter—to help their patients.

“The scarcity of medical oxygen has become the reason for the death of many patients in every part of the country against the fact that several projects for installing the oxygen are still pending with the Union government for clearance, but no heed was given to such an important need by the Modi government,” Dahiya said.

Instead, the government’s foreign missions are focused on rehabilitating India’s image in international publications. The Indian high commission in Camberra wrote a rejoinder to The Australian newspaper’s scathing indictment of Modi’s mismanagement, calling it a “baseless” report that maligns the prime minister.

At home, the Modi administration has tried to mitigate this health nightmare, but it’s too little and possibly too late.

A year of poor planning
In Dahiya’s assessment, Modi has failed to manage the coronavirus pandemic since the start in March 2020.

As evidence of Modi’s misplaced priorities, Dahiya cited the example of former US president Donald Trump’s maiden official visit to India in February last year. The first Covid-19 case was detected in India in January 2020, and at the time, instead of ramping up healthcare facilities, Modi “preferred to organise a gather of more than 100,000 people in Gujarat” in Trump’s honour, Dahiya told The Times of India newspaper.

This lack of planning is laid bare as crematoriums work round-the-clock and India grapples with a never-before death count. But even cremations in parking lots and public parks have not stopped India’s election fervour.

In Modi’s India, the election must go on
Even though opposition parties in West Bengal like the Congress and Trinamool Congress eventually moved virtual rallies—and Modi’s Bharatiya Janata Party (BJP) reluctantly followed—other parts of the country continue to witness large crowds.

Yesterday (April 27), the BJP held a large election roadshow in the southern state of Telangana. It shared images on Twitter of a vast crowd attending this event, only to delete the English version of the tweet later.

Meanwhile, the Allahabad high court in the state of Uttar Pradesh took suo moto cognisance of the panchayat (village administration) polls in the state, where 135 election staff lost their lives to Covid-19. Nearly 2,000 police personnel on duty for these elections in the state have also tested positive for the virus.

But state chief minister Yogi Adityanath, who belongs to Modi’s party BJP, has issued orders claiming that there is no shortage of oxygen in the state, nor is there any mismanagement, and those who report such incidents will stand to have their properties seized.

The Adityanath government had unofficially directed Covid-19 testing labs to reduce testing and without a positive test report, countless people are dying for want of medical assistance. The state government dismissed these charges as mere “rumours.” Uttar Pradesh has some of the country’s largest rural clusters, and reports in The Print and Scroll.in point to an alarming spread of Covid-19 in yet-untouched villages of India.