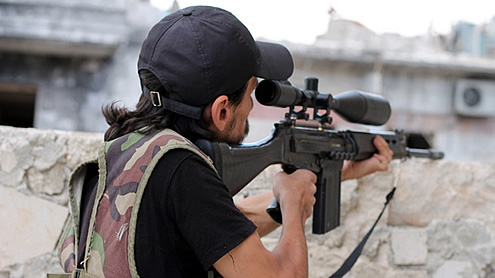 After years of grinding civil war, the Syrian battlefield has seen a wide array of weapons employed by the rebel factions fighting Assad.

From antiquated World War II rifles to homemade mortars, the rebels have used everything at their disposal, but recently the appearance of American anti-tank weapons in the northern town of Heesh has many wondering if the United States is finally about to supply the rebels with the heavy weapons, including shoulder fired MANPADs, needed to counter Assad’s mechanized and airborne forces.

In early April, YouTube videos showed American made BGM-71 TOW anti-tank rocket systems in the hands of Harakat Hazm, a group of moderate Syrian rebels. It’s not confirmed who provided the weapons but they could have come directly from the United States, which has been vague about the exact nature of its support for the rebels. Another possibility is that they reached Syria indirectly and were provided by a country like Saudi Arabia that supports anti-Assad forces in Syria and has its own stock of the weapons that it purchased from the U.S. in the past.

Powerful new weapons suddenly appearing this late in the conflict has generated discussion on whether or not the United States is preparing to send or sponsor the shipment of more advanced weapons into the hands of Syrian rebels. With diplomatic efforts stalled and Assad’s military continuing to use devastating weapons like homemade barrel bombs and, according to some reports, employing improvised chemical weapons, the introduction of advanced U.S. weapons could shift the dynamic in the war and give the rebels better odds.

Wednesday NPR reported that the CIA plans to send more arms and training to Syrian rebels and that 50 TOW missile systems had been sent to Harakat Hazam as a part of a “test” or pilot program. Yet, when asked specifically about the deal, National Security Council spokeswoman Bernadette Meehan kept her response vague. “As we have consistently said, we are not going to detail every single type of our assistance,” Meehan said.

While the TOW missile system is effective against ground targets it won’t help the rebels stop air attacks by Assad’s forces. Those advocating more direct assistance to the rebels have long called for arming the rebels with weapons that could be used against the Assad regime’s aircraft but the U.S. has been hesitant to send those systems. The biggest obstacle to arming the rebels with Man portable surface to air missile systems, or MANPADs as the anti-air missiles are known, is the fear that they could be used outside of Syria’s war in a terrorist attack against commercial aircraft. MANPADs have been around for decades, and became a household name after the CIA supplied millions of dollars worth to Afghan Mujahedeen fighting the Soviets in the 1980’s.

It’s the memory of supplying anti-air Stinger missiles to the Mujahedeen fighters in Afghanistan that haunts many of the people who oppose sending similar weapons to the Syrian rebels. In Afghanistan, many of the Stingers given to Mujahedeen were lost in the din of the conflict and wound up in the hands of terrorist organizations after a CIA buyback program failed to regain them at the end of the war.

“That’s a pretty dangerous weapon to have running around out there, you can easily take down an airliner with an operational system,” said David Maxwell the Associate Director of the Center for Security Studies at Georgetown University. “You’re basically locking on to a heat source, and once it does that it, you fire and it tracks that heat source.”

For now though, the TOW is the heaviest American-made weapon seen on the Syrian battlefield. “It’s a relatively expensive weapon for infantry,” Maxwell said. “It’s not some fire and forget weapon.”

According to Jane’s, a publication specializing in information about global weapons, The TOW missile system was originally fielded by the United States in 1970 and has gone through multiple variations since. The acronym TOW stands for Tube-launched, Optically tracked, Wire Command link guided Missile. But the current TOW fielded by the US military no longer has a wire command linked warhead, instead using an infared aiming system. Syrian rebels, however, appear to operating an older version of the system as screen grabs indicate that the warhead is still wire guided. These days the TOW is used by more than 30 countries and has been cloned by Iran and is known as the Toophan.

While large, the TOW is surprisingly easy to employ and maintain. Per Jane’s US Army statistics indicate that the system has a success rate of 93 percent in more that 12,000 test fires.

“Someone who has no training but knows how to use a sight and trigger can be fairly accurate with [the TOW],” said Sean Feely a TOW Gunner with 1st Battalion 3rd Marines who fought in the second battle of Fallujah in 2004. “As long as you keep the target in your crosshairs you’re fine.”

Feely also indicated that the TOW was reliable, citing he had never seen a misfire during his four-year enlistment. “Not much the user has to do to keep it functioning besides keep it dust free and the [sight] lens clean,” Feely said.

Yet, for all the noise generated over the appearance of the TOW in Syria, U.S. supplied weapons still haven’t made a proven impact in the course of the war.

One of the primary ways the rebels have been able to re-arm and refit over the past three years without significant foreign aid has been through ‘battlefield pickups’ ie taking equipment left over from skirmishes with the Syrian Army.

Thursday, a video showed Syrian rebels purportedly doing just that in the Darwaa province near the Jordanian border. Rebels pick through what looks to be a Syrian Army artillery position  and are seen recovering what appears to be a working Russian T-55 medium tank, at least three Russian 122 mm D-30 Howitzers artillery guns, a ZPU-4 23mm towed anti-aircraft gun, and two SA-7 Grail MANPADs.

As munitions constantly change hands and Americans appear to be entering the fray in a more public fashion Maxwell believes that it will take a lot more than American arms to stop the violence in Syria.

“I don’t think the rebels in their current state even with the TOWs and MANPADs, that they would be able to build up a force to defeat the Syrian Army,” Maxwell said. “Are TOWs and MANPADs on such a small scale a game changer? Probably not.”