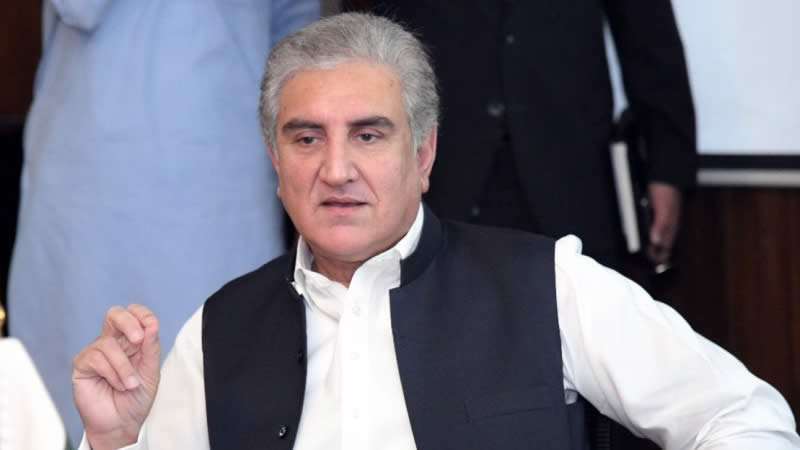 Foreign Minister Shah Mahmood Qureshi on Thursday asked the Biden administration not to overlook the ground realities vis-à-vis occupied Kashmir as he urged the world to help in reaching a peaceful settlement of the Kashmir dispute before it was too late.

He was speaking at a photography and cultural exhibition held at the Foreign Office as part of Kashmir Solidarity Day activities.

“I expect the new Biden administration that has always talked of fundamental human rights to stop ignoring the ground realities in held Kashmir,” the foreign minister asserted.

Mr Qureshi’s comment came in the backdrop of the controversy that started with a tweet by the US State Department’s Bureau of South and Central Asian Affairs in which Occupied Jammu and Kashmir was referred to as India’s Jammu and Kashmir.

“We welcome the resumption of 4G mobile internet in India’s Jammu & Kashmir. This marks an important step for local residents and we look forward to continued political & economic progress to restore normalcy in J&K,” the tweet read.

The State Department’s spokesman Ned Price later clarified at a media briefing that US policy on Kashmir had not changed and it still considered Kashmir as a disputed territory.

“I want to be very clear, there has been no change in US policy in the region,” Mr Price said. However, despite the clarification by the State Department spokesman, the tweet was not corrected.

This prompted Pakistan’s Foreign Office to express its reservations about the tweet.

FO spokesman Zahid Hafeez Chaudhri said Pakistan was “disappointed” about the reference to Jammu and Kashmir in the State Department’s tweet regarding the resumption of mobile internet in Occupied Kashmir.

“The reference is inconsistent with the disputed status of Jammu and Kashmir as recognised by numerous United Nations Security Council resolutions and the international community,” he maintained.

At the photography exhibition, Mr Qureshi once again took a jab at the Arab-dominated Organisation of Islamic Cooperation (OIC) by asking it to respect its people’s sentiments about Kashmir.

“I expect the OIC to not overlook the sentiments of the people in their countries. Priorities of governments could be different, but the sentiment of the people is somewhat different. Recognise it, see for yourself how things are moving,” the foreign minister said as he recalled that Pakistan was the founding member of the 57-member bloc of Muslim countries.

The OIC has passed several resolutions on Kashmir, but Pakistan has been unhappy with some of the group members for not having actively raised the issue with India and emphasised the need for its resolution. Rather some of the countries, especially Arab monarchies, are promoting their ties with India.

Urging the world to help in resolving the dispute, Mr Qureshi said: “We all have to sit down and find a way out.” He warned that the escalating situation was unsustainable and some “accident” could happen.

The foreign minister reminded the world that it could be sucked into the conflict if peace and stability was affected.

In Washington, the clarification about US policy on Kashmir, given at a news briefing on Wednesday afternoon, followed a string of statements by US President Joe Biden and senior officials of his administration, outlining their policies towards the South and Central Asian regions.

The regions include India, Pakistan, Afghanistan and China and the policy outlines indicate a gradual change of emphasis from Pakistan and Afghanistan to China. The statements also show a greater US reliance on India to help counter China’s growing influence in the regions. But the clarification on Kashmir shows that Biden administration is not insensitive to Pakistan’s concerns either.

At the briefing in Washington, journalists also asked the US official to comment on Twitter’s decision to block over 500 accounts after the Indian government accused them of making inflammatory remarks against Prime Minister Narendra Modi.

“I would say generally that around the world we are committed to supporting democratic values, including freedom of expression,” Mr Price said. “When it comes to Twitter’s policies, we’d have to refer you to Twitter itself.”

On Feb 9, President Biden telephoned Mr Modi and underscored his desire to fight together the scourge of global terrorism and to “defend democratic institutions and norms around the world”.

The Indian media, while commenting on the White House readout of the conversation, noted that Mr Biden’s emphasis on “democratic values” was slightly different from the Trump administration’s focus on “security, driven in large measure by growing Chinese … assertiveness” in the region.

But on Tuesday, the State Department did assure New Delhi that in the India-China disputes, Washington would stand by its “friend and allies.”

Spokesman Price said the US was closely monitoring the situation along the India-China border and was concerned about Beijing’s “attempts to intimidate its neighbours”.