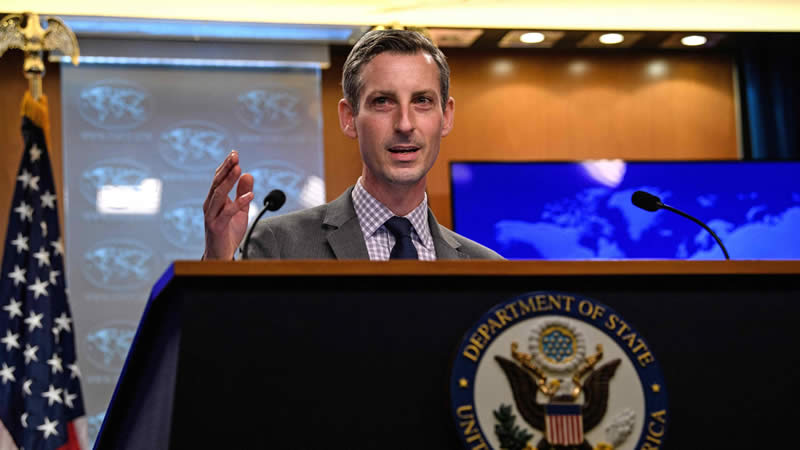 The United States wants Afghanistan’s neighbours not to recognise any government in Kabul that has been imposed by force.

The demand — made at a Tuesday afternoon news briefing at the US State Department — preceded a meeting of the Troika Plus nations in Doha on Wednesday.

The group, which includes the US, Russia, China and Pakistan, is aimed at finding a political solution to the decades-old war in Afghanistan.

During the news briefing, US State Department spokesperson Ned Price said that two key meetings were being held in Doha this week, bringing together representatives from the region and beyond and from multilateral organisations.

The participants will press for a reduction in violence, a ceasefire and a “commitment by the part of these regional and broader governments and multilateral and international institutions not to recognise any government that is imposed by force,” Price said.

The meetings in the Qatari capital come as the Taliban have stepped up their campaign to defeat the government as foreign forces withdraw.

On Wednesday, the Taliban seized three more provincial capitals in Afghanistan, putting nine of the nation’s 34 in the insurgents’ hands.

US Special envoy for Afghanistan Ambassador Zalmay Khalilzad is representing Washington in the talks in Doha.

Pakistan has sent its special envoy Muhammad Sadiq and its ambassador to Kabul, Mansoor Khan. Kremlin’s envoy to Afghanistan Zamir Kabulov and the newly appointed Chinese envoy for Afghanistan Yue Xiao Yong are representing their countries.

All these countries have major stakes in bringing peace to Afghanistan and are seeking a regional consensus on the Afghan conflict despite their differences.

In the press briefing, Price said that Khalilzad had been sent to Doha to “advance a collective international response to what can only be termed as a rapidly deteriorating security situation”.

However, the US media on Tuesday reported that Khalilzad was there to warn the Taliban against pursuing a military victory on the ground.

He will “deliver a blunt message: A Taliban government that comes to power through force in Afghanistan will not be recognised,” media reported.

In a Voice of America interview earlier this week, the Afghan-born US envoy warned that if the Taliban took over the country by force, “they will become a pariah state”.

He reminded the insurgents that “there must be a political solution, a political agreement for lasting peace, and we will stay with it. We are committed to staying with it until that goal is achieved.”

In another interview with Radio Free Europe, Khalilzad — the architect of the 2020 US-Taliban agreement that paved the way for the foreign pullout — warned of a “protracted-war” if the Afghan government and the Taliban focus on a “military solution” to end hostilities.

He said that the lack of progress in peace talks has led “both sides to focus on a military solution”.
Extended Troika

The Extended Troika, a Moscow-initiated group, conducts regular consultations to find a negotiated solution to the Afghan conflict.

The Troika talks preceded a meeting on Tuesday of Afghanistan’s immediate neighbours. Russia, the United Nations and US were also invited to this meeting.

A spokesman for the Taliban’s political office told Al Jazeera TV that the group was committed to the negotiation path in Doha and does not want it to collapse.

However, a member of the Afghan government delegation in Doha demanded a mediator in the negotiations “to determine the seriousness of the parties”.

But the Taliban spokesman claimed that “it was the government that rejected the principle of a mediator, not the Taliban”.
US defence secretary calls COAS

On Monday, US Defence Secretary Lloyd Austin called Army Chief Gen Qamar Javed Bajwa and “expressed his interest in continuing to improve the US-Pakistan relationship and build upon our multiple shared interests in the region,” Pentagon said.

Responding to a journalist’s question, Kirby said the US continues to have conversations with the Pakistani leadership about safe havens that exist along the border between Afghanistan and Pakistan.

“We are mindful that those safe havens are only providing a source of more insecurity and more instability inside Afghanistan. We are not bashful about having that discussion with Pakistani leaders,” he said.

Foreign Minister Shah Mahmood Qureshi, however, has lamented using Pakistan as a scapegoat for the problems in Afghanistan, as he responded to the allegations levelled by Afghanistan at the United Nations Security Council.

“It is unfortunate to make Pakistan a scapegoat for the failures of others; the issues of governance and meltdown of Afghan National Defence Forces need to be looked into — and not just start pointing fingers at Pakistan,” he said at a recent briefing in Islamabad.