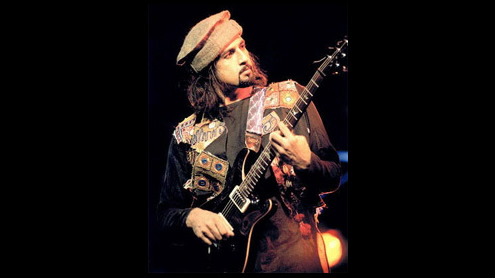 On September 26, Indian Prime Minister Manmohan Singh will turn 80. To celebrate the occasion, musicians from both sides of the border are gearing up to strum a new note — of cross-border peace and harmony.

Taking part in the celebrations to be organised at the PM’s birthplace, Gah, Punjab, in British India (now Pakistan) will be Sufi rockers Junoon and Sunidhi Chauhan, Times of India reported. Salman Ahmad of Junoon, who is looking forward to meeting the PM soon, said he was approached by Rajendra Kumar Pachauri, who served as the chairperson of the Intergovernmental Panel on Climate Change, which was awarded the Nobel Peace Prize in 2007 during his tenure. “Dr Pachauri invited me for dinner in Delhi and said that the prime minister would like Junoon to perform at the PM’s 80th birthday celebrations in his Pakistani birthplace.

” Salman was quick to rope in Sunidhi, who has sung with him for the forthcoming Bollywood film, ‘Rhythm’. “It would be great to show Indo-Pakistan harmony through music. Besides, I love Sunidhi’s voice! Junoon has always promoted love and friendship between India and Pakistan and I feel that music is the most powerful force to bring the two neighbours together,” he says. Even though the line-up of songs is not yet ready, Salman says he would like to perform the band’s hit numbers like “Ghoom tana”, “Khudi ko kar buland”, “Dum mast qalandar”, “Dosti” and “Sayonee”.

Ask him how it feels to have been asked to perform for the Indian prime minister and he says, “As a UN Goodwill ambassador and a Pakistani artiste, I feel honoured to have been asked to perform for the Indian head of state. We (my wife Samina and our organisation) believe that cross-cultural cooperation is an urgent imperative for a more peaceful and prosperous South Asia.” If a message of peace through music is what the rockstar is looking at, Salman has also thought of a special gift. “I want to gift the prime minister Junoon CDs and a book of Punjabi Sufi poetry by Bulleh Shah.” -Dailytimes

Pakistan can pay off debts within six months