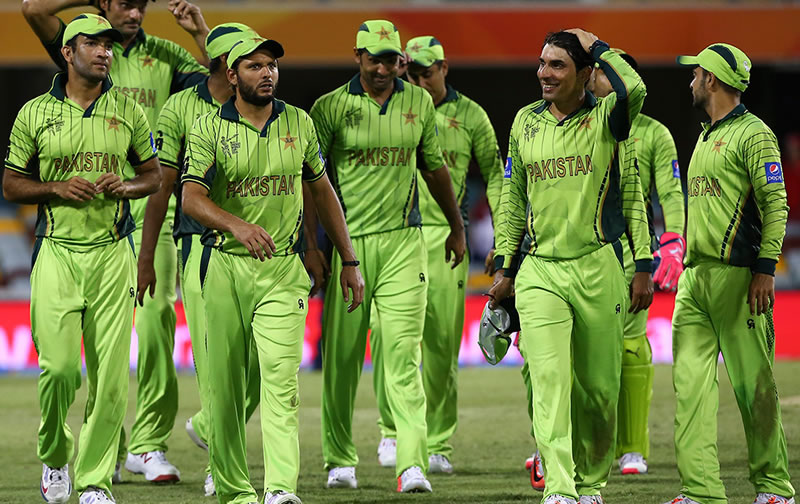 Pakistan’s World Cup 2015 campaign ended as it should’ve, with a best-eight showing in the elite cricket competition.

Anyone who thought the team could’ve done better either suffers from unreasonable patriotism, or believes the bookies made us lose. It was naive to think that this band of creaking joints and clueless greenhorns could maintain their giant-killing act throughout the tournament. For a brief moment in the quarterfinals, we made Australia antsy, got our foot in the door, and then chopped it right off with poor fielding. No surprises there, that’s how the Green-Shirts have played ODI cricket of late. That said, we should be right pleased with the bottom-line. Misbah’s men did their limited best, and Pakistani fans can live with that. For starters, we didn’t implode in a knockout game. Sri Lanka’s much vaunted batting unit got steamrolled by the Proteas. Similarly, the West Indies pace battery got savaged by an unlikely Kiwi, Martin Guptill. Pakistan made the middling score it was capable of against a red-hot Australia, and then let loose the fired-up Wahab Riaz hoping for a miracle. Unfortunately, the team reverted to its butterfingered self, and it was all funereal from there. History, I feel, will be kind to Misbah-Ul-Haq. Long after the taunts of ‘tuk-tuk’ have faded, he will be remembered as the wartime Churchill of Pakistan cricket.

As captain and batting mainstay, he inherited a rolling stone on its way down, and arrested the slide. Now Misbah may not have spit-shined that stone into gold, but we’re not just cheats anymore, or fixers. Sure, there were times when he looked indifferent as captain, but we quickly forget the fragility of his charges. His are also big middle-order boots, and filling them will take some doing. Speaking of ODI boots, Shahid Afridi has also hung up his. To Shahid’s legion of fans, the man has been entertainment personified; a single-minded rebel against conventional batsmanship. Unfortunately, after his early batting heroics, Shahid started believing in his own hype and stopped progressing.

His generation of pinch-hitters, including Dilshan and Sehwag, added nuances to their bludgeoning ways, but not him. Luckily, as Shahid’s batting prowess diminished, his skidding leg-spin blossomed, and he kept his place in the team. In the last year or so, however, both faculties had floundered, and he probably saw the end coming. Misbah’s ODI departure marks the end of an era, and we aren’t exactly spoilt for captaincy choices. Normally, the populist hankering for an Afridi reprise would surface, but he’s gone too now. The PCB decided last year that it wanted a young successor, so eager beaver Younis Khan is out of the equation.

‘Professor’ Muhammed Hafeez, the longtime heir, seems to have lost favor with the PCB, or so his television appearances suggest. His tactical merits or lack thereof aside, Hafeez refuses to grind himself out of a hole, and his batting never inspires confidence anywhere other than on featherbeds. The real question, then, is what makes an ideal ODI skipper? Safraz Nawaz and friends value a ‘big heart’ over everything else. Unfortunately, a big heart with an ordinary technique is still a poor cricketer. Umar Akmal, arguably, has the biggest of hearts, but that extra blood drawn away from his brain makes him do foolish things. If Imran or Miandad are the benchmarks, then the next captain should be a big match player, able to both absorb pressure and change gears at crunch time.

Right now, its slim pickings on all counts. Wahab Riaz and Sarfraz Ahmed are the only ones that tick any sort of boxes. Both are all-rounders, have proven their appetite to win, and don’t let the game meander into oblivion. That said, they’re still works in progress. Wahab’s bowling radar frequently shorts out, and he then sprays it all over the place. Sarfraz, similarly, is a misfit at the top of the batting order. He has the guts, but plays away from his body too often to be consistent against good bowling. Pakistan is best served by having this scrappy counterpuncher be a finisher at number seven.

Without fail, the PCB has now dusted off the ‘we’re rebuilding’ mantra, which will be duly parroted till 2019. Given the myriad, copiously documented hurdles, not much can change. Especially when no one’s going to bed without dinner. India, by comparison, has helped others help itself. The IPL and CLT tournaments have added steel and spine to its cricketing structure, and upcoming Indian batsmen are growing while battling the best. India’s previously pedestrian bowling resources have also acquired a discipline and focus that only comes from intense competition. Sadly, due to subcontinental politics, our cricketers have largely been denied access to both tournaments, and suffered for it. This, however, does not excuse their poor fielding and catching forms. In such bio-mechanically repetitive endeavors, practice makes perfect, and the Green-Shirts are obviously not paying their dues. In hindsight, we robbed Shahid Afridi of one last hurrah. For had the team held on to half those chances, we could’ve squared off against Bangladesh in the quarterfinals. One more match, another blue moon, and Afridi could’ve gone tick.tick.BOOM.

Facebook Bets on Messenger App, Opens it to Developers