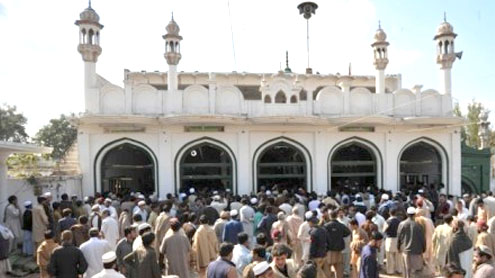 A bomb blast in a mosque adjacent to the shrine of Akhun Panju Baba in Akbarpura area of Nowshera district is the latest in a series of attacks on shrines and mosques. A timed device exploded when people were having langar (free food) from the shrine after the Friday prayers. Ten people lost the lives, while scores were injured. It should be clear to any thinking Pakistani how a minority wielding arms and backed by forces interested in promoting that particular brand of ideology is trying to sabotage the lifestyle and religion of the majority following Sufi saints and the whole culture surrounding that tradition. Unfortunately, the ordinary Pakistanis are caught in the web of conspiracy theories that abound in the media and behind which public figures and political leaders knowingly take refuge. Since the arrest of Raymond Davis, the foremost contention of these conspiracy theories is that all this is being perpetrated by American agents who want to destabilise Pakistan and defang it of its nuclear capability. Another of our favourite punching bags is India, which is held responsible for everything from the insurgency in Balochistan to terrorist activities in Khyber Pakhtunkhwa. Afghanistan is another addition to this list of demons whose interest lies in destabilising Pakistan, according to the conspiracy theorists. However, these theories, which hold everyone responsible but elements within Pakistan of these acts, are nothing more than red herrings. Has anyone thought how can the foreign elements operate with such impunity in a country that has one of the biggest and most capable militaries of the world? While the Baloch insurgency is being brutally crushed with thousands of activists abducted and killed, how do these elements, which do not even have the popular support, are blowing up schools, shrines and mosques with no one to stay their bloody hand.We are like the owner of the house which has been set on fire by one of its members, who goes searching for the culprit among the neighbours. We have to get out of this state of denial, which is the biggest obstacle in the way of tracking down the real culprits. However, this cannot go on forever. With each shrine they attack, the terrorists are getting diminishing returns and sooner or later people will wake up to the reality. Then all those who have been patronising these elements will be exposed – Dailytimes